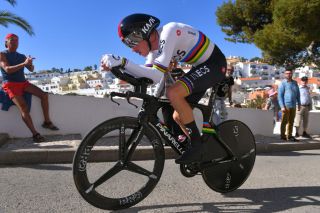 Rohan Dennis continued the road to his main goal of the season, the Tokyo Olympics, by taking second place in the final time trial of the Volta ao Algarve, his second stage race as a Team Ineos rider.

The Australian finished ten seconds behind the eventual overall race winner, Deceuninck-QuickStep's Remco Evenepoel, in Lagoa, the second runner's up spot of his 2020 campaign after the time trial at the Australian National Championships.

As he waited backstage before taking the team prize along with his new teammates, Dennis said that he was nevertheless pleased with his performance, adding that there was nothing that could be done to stop Evenepoel on his current form.

"Obviously it would've been great to win, but hats off to Remco," Dennis told the assembled reporters. "I thought it was always going to be close between him and me, but he got me today.

"I think there were a couple of corners I could've gone a little bit harder through, but I still wouldn't have won. I'm happy with the performance, especially for February."

Last September saw Dennis retain his world time trial title, almost two months removed from his Tour de France exit. On the 54km course in Yorkshire, he beat Evenepoel by 1:09, the first time the pair had faced off in an individual time trial.

Sunday's 20km stage was the second, but this time Evenepoel turned the tables to take the spoils. While praising Evenepoel for his victory, Dennis said that it doesn't make any difference to race outcomes to think about what his opponents are capable of, instead preferring to focus on himself.

"We all saw last year that he was always going to be one of the best in the world," Dennis said of the 20-year-old. "Obviously, in Yorkshire, he got second, and he's won every time trial this year. In the end, I think I could stress about him and it wouldn't change anything.

"I'll continue to worry about myself and what I can do to be better, and that's all I can do to try and be the best time trialist in the world."

Dennis, who has now worn the rainbow bands since beating Tom Dumoulin in Innsbruck two years ago, added that he also doesn't view himself as the best time trialist in the sport, saying that to do so would lead to complacency.

"I never look at myself as the best time trialist in the world, so I always think of who can beat me on the day and how to get the best performance out of myself," he said.

"As soon as you look at yourself as the best in the world, you become complacent and stop pushing yourself to be better. That's the way I look at it and always have."

With the early season block of the Tour Down Under and Volta ao Algarve over and done with, the questioning turned to Dennis' future aspirations. He's set to ride the Giro d'Italia in May, returning after a year away to tackle the trio of time trials on offer in Italy. There, he'll do battle with Evenepoel once more.

"Of course, it would be nice to take pink on the first day," he said. "I have no ambitions for GC, so I'd be happy to lose it and take that pressure off the team. It's a goal for me to win at least one time trial at the Giro. The others depend on how things go with Carapaz."

It's still February now though, and the Grand Tour season – and top form – is still some way away. When asked where exactly he'll be in top form in 2020, Dennis replied with an emphatic one-word answer.