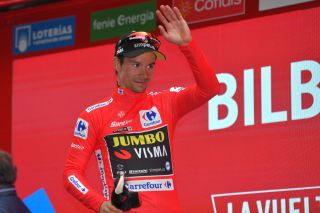 Vuelta a España leader Primoz Roglic (Jumbo-Visma) said he is confident of chances of defending his overall lead in the race's upcoming mountain stages, starting with the much-feared Machucos summit finish on Friday.

Roglic and the rest of the Vuelta a España peloton face three summit finishes in four days. After Los Machucos, last tackled in 2017, there will be unprecedented ascents to the Alto de Acebo in the northerly region of Asturias on Sunday and la Cubilla on Monday, before a second rest day and the final week mostly around Madrid.

The mountain stages across northern Spain represent the first tough climbing tests for Roglic as race leader of the Vuelta a España since he moved into the top spot overall in the race's sole time trial on Tuesday.

The Slovenian currently has a solid advantage of 1:52 over second-placed Alejandro Valverde (Movistar), with Miguel Angel Lopez (Astana Pro Team) in third at 2:11.

Whilst he recognised after stage 12 that there are some "hard days" to come, Roglic insisted that he was "not scared" of any of the climbs.

"Today was an honour to wear the red jersey but I will be happiest in Madrid," Roglic told journalists after the stage where he finished safely in a considerably reduced main bunch. "It's a pleasure to wear it, but it's also a big responsibility."

Asked if he thought the Vuelta was over in all but name, given the Slovenian star has such a solid advantage and did not show any signs of being overly weak in the previous mountain stages, Roglic said, in what appeared to be a rare public attempt at humour, "I hope it's over," before quickly switching back to his usual, more serious way of talking.

"There are some really hard days to come and we have to do our best. But I'm not scared of any stages, because we have a strong team, we take the right approach," he argued

Evidence of the power of Roglic's team to keep the race under control was abundantly available on Thursday as Jumbo-Visma, with Robert Gesink doing much of the work, wore down the peloton on the three climbs preceding a fast, technical descent into Bilbao.

Then when Lopez delivered a timid attack on the Arraiz, the last and steepest of the three ascents, it was quickly closed down by Roglic in person.

"It took a little longer for the break to go today, but the team was very strong," Roglic repeated. "Everything was under control and we had another day in red."

As for Los Machucos, Roglic admitted that he did not know the climb, which he called 'tough" but he did not seem overly deterred at the prospect. Given the way he and his team have managed to handle the mountains up to now, with rivals only opening minimal gaps even when he crashed in Andorra, it's not too difficult to understand why.