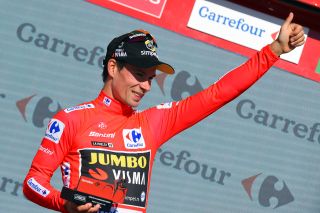 It’s never enough, as Primoz Roglic (Jumbo-Visma) knows only too well. The Slovenian has a lead of almost two minutes atop the general classification of the Vuelta a España following his dominant display in the stage 10 time trial in Pau, but then he held a similar buffer at the same point of this year’s Giro d’Italia only to reach Verona in third place overall.

“It’s like that. It’s never enough, even if you have ten minutes,” Roglic said when he took a seat in the press room in Pau on Tuesday evening, dusting off the very same line he used after crushing the opposition by strikingly similar margin in San Marino in May. “I’m happy with how it is now. I’ll to do my best and go day by day.”

Roglic began the 36.2km test just 6 seconds off the maillot rojo of Nairo Quintana (Movistar), meaning that he rolled down the start ramp in the knowledge that his effort was all but certain to end with a trip to the podium. Quintana, Alejandro Valverde and Miguel Angel Lopez (Astana) knew it, too. The only question was how much time they would leak to the Slovenian.

The race of truth rendered its inexorable verdict. Come the first time check after 12km, Roglic already had more than a minute in hand on both Quintana and Lopez. Valverde was faring a little better, but by day’s end, all three men found themselves that their deficits to Roglic had yawned out to most unruly dimensions.

Roglic beat an impressive Paddy Bevin (CCC) by 25 seconds to claim the stage win, but the gaps in the general classification are rather more striking. Valverde is second, at 1:52. Lopez lies third at 2:11, while Quintana is now all of 3 minutes behind Roglic.

“In every time trial, you try to go as fast as possible,” Roglic shrugged afterwards. “It was the same mission today and, yeah, I’m happy with the performance.”

Roglic’s mission for the remainder of this Vuelta is precisely the same one he had at this point on the Giro, namely, to manage his hefty buffer from here until the fourth Sunday on the race. In May, a combination of Jumbo-Visma’s depleted team and Roglic’s diminishing health saw his overall lead evaporate by the end of the second week, but he downplayed the idea that he might struggle to go the full distance here.

“We’ll see. So far, I’m feeling pretty good, and I also didn’t have a lot of luck. I already had had some crashes, but I’m just looking forward,” Roglic said. “I’ll try to stay healthy and in one piece. I’m not so worried about that.”

Indeed, the Slovenian’s overall lead would be heftier had his Jumbo-Visma team not crashed in the opening team time trial and had he not fallen on the gravel sector in the finale of Sunday’s hailstone-buffeted epic in Andorra. The incidents cost him valuable seconds, but the injuries appear to have had little impact.

“I’m still functioning well. The one is Andorra is healed on one side but open on the other,” Roglic said. “Looking at my performance, I think I can still perform well, and I’ll try to stay healthy and safe for the next days.”

At the Giro, the early loss of Laurens De Plus meant that Jumbo-Visma was reluctant to carry the weight of the maglia rosa for the remainder of the race, preferring to concede the lead to Richard Carapaz in the Alps. That proved a costly strategic error but, despite Steven Kruijswijk’s abandon, the Dutch squad appear placed to offer more robust support on this Vuelta.

The heat in the press tent at the finish was such that Roglic removed his maillot rojo and laid it on the table in front of him before fielding questions from reporters, but it seems unlikely that he will surrender the tunic as readily out on the road.

“We will just see how the race goes, how it is every day with the breaks,” Roglic said when asked if he would try to farm out the overall lead as he had done on the Giro.  “For us, we just need to be focused every day from the start to have the control, then I will just try to do the best for us. Still, the main goal is to have the jersey in Madrid.”