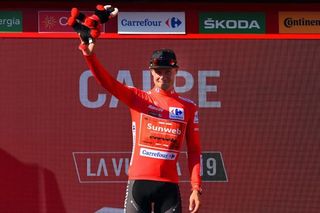 Roche back in the Vuelta a Espana lead after six years

Team Sunweb's Nicolas Roche, who spent three days in the red jersey as leader of the Vuelta a España before a crash on stage 6 forced him to abandon last Thursday, has now been diagnosed with a fractured kneecap, his team has reported.

Roche was part of the mass crash that happened mid-way through the stage from Mora de Rubielos to Ares del Maestrat on August 29, and was forced to abandon the race, as were CCC Team's Victor de la Parte and EF Education First's Hugh Carthy and their team leader Rigoberto Uran.

In the immediate aftermath, Roche was diagnosed with a bruised right quadricep and received stitches to his left forearm. However, further medical tests have revealed a fractured left patella.

"Upon returning home he underwent further examinations with an MRI scan revealing a fractured left patella," explained Sunweb team doctor Camiel Aldershof. "Nicolas will continue to take it easy for the next few weeks and, if all goes to plan, he should be back on the bike within four-six weeks."

Roche spent three days in the red jersey, only losing the race lead the day before the crash.

"After going through the big disappointment of leaving the Vuelta, I held hope that I would still be able to continue riding my bike and compete in the Italian Classics once the edema [swelling] had healed," said Roche.

"But this news has just hit me again – so now my priority is to look after my rehabilitation in the best way possible so that I can get back healthy and on the bike ASAP," he said.