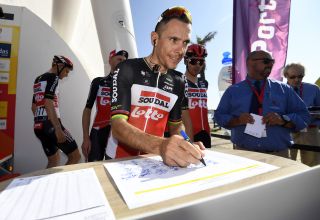 Philippe Gilbert has revealed that he was fined €100 for training outdoors in Monaco in contravention of the lockdown measures in place during the coronavirus pandemic.

Monaco residents are permitted only brief periods of outdoor exercise near their homes, which has limited professional riders based in the Principality to their home trainers or to short runs outside.

Gilbert attempted to train on his bike on an 11km circuit in the immediate vicinity of his home in Monaco – “three or four laps to get in a quick hour outside for some fresh air and variety” – but he was stopped and fined by a police officer. The Lotto Soudal rider told Monaco Info earlier this week that he accepted the penalty and was now only training indoors.

“All citizens are equal before the law. Just because I won Paris-Roubaix last year, I don’t have any more rights than anyone else. The fine was €100,” Gilbert told Monaco Info. “As public figures, we need to set an example. I’ve put the bike aside and now I’m only training on the turbo trainer.

“Up to a few days ago, it was tolerated in the Principality for professional riders [to train outside] but that changed not long ago and now we must adapt and train indoors.”

Gilbert also owns a bicycle shop in Monaco, but its doors are currently closed even the business was among those with the right to stay open during the current period of lockdown. The Bike Shop by Philippe Gilbert remains on call to perform repairs for those in need.

“Given that bikes are a form of transportation, we have the right to stay open but seeing as everybody is in lockdown, we’ve decided to close the shop itself,” Gilbert explained. “We are still on call for repairs because people are still riding bikes to go to the shop or make necessary journeys. We’ve helped out a few people that way, so we’ve been fulfilling our role as best we can.”