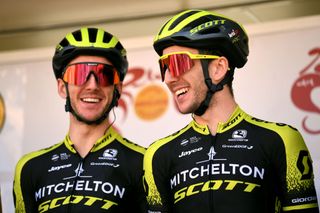 The Mitchelton-Scott team have announced a further 16 events in their virtual ride series amid the race cancellations and precautions surrounding the coronavirus outbreak.

Last week Mitchelton-Scott announced that they had withdrawn both its men’s and women’s teams from all racing with immediate effect until at least March 22.

The decision was made in light of the ongoing coronavirus outbreak, which has become worse across Europe and lead Italy to decide on a near lockdown in an attempt to reduce the spread of the coronavirus. Recreational cycling is no longer allowed in Italy, with only professional riders allowed to train outdoors and alone. The rising number of cases is expected to force other major nations to take similar action in the days and weeks ahead.

Van Vleuten: 'Health above all' as coronavirus outbreak threatens Strade

Mitchelton-Scott held the first of their 'BikeExchange – Where the World Rides Series' on Sunday, using the popular Zwift platform and attracting over 1,300 participants, to the ride with 30 of their riders.

The new events will be almost daily, with the opportunity to ‘ride’ alongside and interact with riders from both the men’s and women’s teams.

Some of the events will also be streamed live by Zwift and on the Mitchelton-Scott Facebook page.

Details of how to join all the rides will be announced on the team’s various social media channels in the days to come.