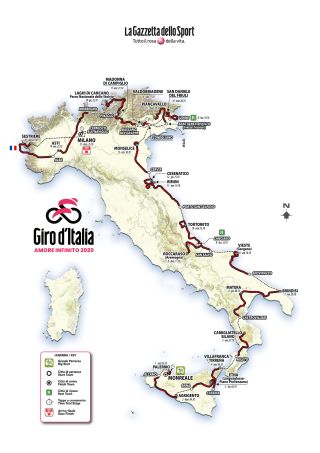 The revised route of the 2020 Giro d’Italia has been released in full by organiser RCS Sport, with finishes at Matera and atop the climb of Roccaraso added in the opening week to replace the cancelled road stages in Hungary.

As was announced last week, the Corsa Rosa will get underway in Sicily with a short, largely downhill time trial from Monreale to Palermo on Saturday October 3, while the second and third weeks of the corsa rosa will be unchanged. The final weekend features a tough mountain stage to Sestriere before the race concludes on October 25 with a 16.5km time trial in Milan.

The 2020 Giro was originally slated to start in Budapest on May 9, but the race was postponed in March due to the COVID-19 coronavirus pandemic, and race director Mauro Vegni later confirmed that Hungary would not host the Grande Partenza of the rescheduled race.

2020 Giro d'Italia to start with four stages in Sicily

The first Italian stages on the original 2020 Giro route were already due to take place in Sicily, while the region was also in line to host the Grande Partenza of the 2021 race. Last week, RCS Sport confirmed that Sicily would instead step in to host the opening four stages of the revised and rescheduled 2021 Giro.

The Giro thus gets underway with 15km individual time trial that brings riders downhill from the Norman-Byzantine cathedral at Monreale into the centre of Palermo, where all eyes will be on home favourite and Sicilian Vincenzo Nibali (Trek-Segafredo), who has eschewed the Tour de France to ride the Giro.

The first mountaintop finish comes on stage 3, with the gruppo scaling Mount Etna via a new approach from Linguaglossa, while the first day on the Italian mainland is stage 5 from Mileto to Camigliatello Silano, which was already on the original route presented last October.

A new addition to the route comes the following day, with stage 6 bringing the riders from Castrovillari along the coastline of Basilicata to a finale in the striking city of Matera, famed for its ancient cave dwellings, the sassi. John Degenkolb won on the Giro’s last visit to Matera in 2013.

After stage finishes for the sprinters at Brindisi and Vieste on the coast of Puglia, the final major alteration to the Giro route comes on stage 9, which starts from San Salvo and features a summit finish at Roccaraso.

The extra summit finish brings the curtain down on the opening week of the 2020 Giro. The action resumes following a rest day with a stage from Lanciano to Tortoreto, and the race follows its previously outlined route north thereafter.

Return to original script in weeks two and three

Highlights of the second week include stage 12, which starts and finishes in Cesenatico and follows the route of the Nove Colli Gran Fondo in honour of the mass participation event’s 50th anniversary.

The third weekend of the Giro features a potentially pivotal 33km individual time trial through Prosecco country from Conegliano to Valdobbiadene on stage 14 ahead of a summit finish at Piancavallo in the Carnic Alps on stage 15.

The final week of the Giro, as ever, is a demanding one. Stage 17 features the climbs of Forcella Valbona, Monte Bondone and Passo Durone ahead of a summit finish at Madonna di Campiglio, for a total of more than 5,100m of climbing.

Stage 18 is no easier, with the Campo Carlo Magno (14.3km at 6%), Passo Castrin (23.7km at 4.7%) preceding the highest point of the race, the Stelvio, which is tackled from its celebrated, hairpin-garlanded approach from Prato all Stelvio (24.7km at 7.5%). The stage concludes with a summit finish at Laghi di Cancano for a total altitude gain of 5,400m.

After a brief respite on the road to Asti, the final climbing instalment of the Giro comes on the penultimate day, with the 2,744m-high Colle dell’Agnello, Col d’Izoard and Col de Montgenèvre on the agenda before a summit finish at Sestriere.

The Giro concludes with a flat and fast 16.5km time trial from Cernusco sul Naviglio to Milan with the finale taking place on Piazza del Duomo.

The grand finale will take place on the same day as the men's and women's editions of Paris-Roubaix and the rescheduled Vuelta a España’s first summit finish on the Tourmalet.

Speaking to La Gazzetta dello Sport on Thursday, UCI president David Lappartient defended the overlap of major races on the 'Super Sunday' of October 25, adding that the UCI had asked RCS Sport to bring the Giro forward by a day so as not to clash with Paris-Roubaix.

"The three races will have different schedules so they don't clash on television," Lappartient said.

The Giro d'Italia is expected to have an evening finish just before the autumn evening falls over Milan.

From Calabria to Roccaraso passing by Matera (Stages 5-9) #GiroDay pic.twitter.com/j1QhIpqqHCJuly 30, 2020