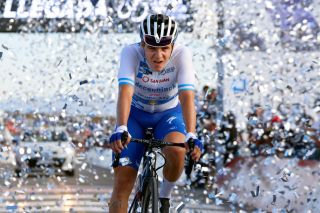 Remco Evenepoel had his sights on the Giro d'Italia and Olympic Games after winning both the Vuelta a San Juan and Volta ao Algarve this year, following up his first one-day race win at the Clasica San Sebastian and silver medal in the time trial at Worlds last year.

First, the Giro was postponed, and now the Olympic Games. It was a big disappointment for the Deceuninck-QuickStep rider when he learned of the IOC's decision to move the games to 2021 because of the coronavirus pandemic.

"This is a big blow," he said to VTM, admitting he was upset at hearing the news. "I was home alone and I cursed. And yes, I had to shed a tear. We were doing super well, but unfortunately, that's gone now. Of course, that makes sense, people's health takes precedence now. But this is one of the biggest slaps in the face."

Evenepoel has ruled out pivoting to preparing for the Tour de France if it is organised. "Even I can't do that, it's not physically feasible. I won't make my debut in a Grand Tour in the Tour de France. That has been discussed with the team for a while now and I will stick to that."

His first goal will be the Belgian championships if they go ahead in June. "That will be a huge target if the championships continue. Though it will be for the whole peloton. And as long as it hasn't been cancelled, I'll hold on to that."

"I will prepare again for [Tokyo 2021]. For me maybe it's not so bad because I'll have one more year to get stronger and get more experience. I'll do everything to be in top shape and be there in 2021," Evenepoel said in a team video.

Jumbo-Visma's Tom Dumoulin, the time trial silver medalist at the 2016 Games, commented on Twitter: "It's understandable that the Olympics are being postponed and it's good that a decision has already been made at this stage. This provides clarity. It's too bad for me and many other athletes.

"But I suppose, and I hope, that we can look forward to the Olympics in the next year. At this moment, there are more important things in the world than sports. "

Mark Cavendish had yet to prove himself to his new Bahrain McLaren squad and took to Twitter to also back the IOC's decision.

"Big news and it's the right call: Tokyo 2020 postponed. Of course, we have bigger things to worry about right now, but on a sporting side, there are going to be a few nations thankful for 12 months more preparation!" he wrote.

Trek-Segafredo gathered comments from their riders, including Rio bronze medallist Elisa Longo Borghini, who welcomed an early announcement after the IOC said it would wait until late April to make a decision on whether to host the Games as planned.

"We will have the opportunity to plan our preparation in time and to be ready for the new time," Longo Borghini said. "For athletes, this is just a setback, and nothing compared to what thousands of people in the world are facing. It's right that the sport should stop. The priority is people. My thoughts are only with them, with those who suffer and fight every day against this emergency."

Longo Borghini's teammate Lizzie Deignan, the silver medallist at the 2012 London road race, was planning to retire after Tokyo but will continue through to the 2021 Games now.

"The Olympics have always been a huge part of my career. I was lucky enough to compete and win a medal in a home Games, and those memories will stay with me forever. Although I am disappointed about the postponement of Tokyo, I am sure that it is the right decision.

"The Olympics is a celebration of sport but also of our global community and together we need to work towards a different kind of victory. I have the motivation and optimism to carry me through to an Olympics in 2021, and what a special Games those will be."

Vincenzo Nibali, of the Trek-Segafredo men's team, expected to be a favourite for a medal in Tokyo supported the decision to postpone, and also intends to fight on for a 2021 Games.

"The Olympics, for every athlete, is an event of great importance. All the more so if the athlete is predicted as a protagonist," Nibali said. "Tokyo 2020 was a goal of my season; perhaps the most important. But the postponement of a year does not change my aspirations and, from now on, I can say that I will plan my preparation to arrive at the event in the best possible condition.

"I think the IOC made the right choice. Right now, the world needs to focus its efforts on fighting the emergency. Sport can wait. And in 2021 we will all be ready to celebrate its rebirth together."

His teammate Richie Porte said training was too difficult for most athletes to properly prepare for a July Olympics.

"With the epidemic that is the coronavirus, I think unfortunately it is the right decision because we're all on home trainers, swimmers can't swim in pools and all the other athletes are unable to train properly. It really makes sense that the decision had to be made.

"We're seeing people dying and with the increasing the numbers of infection, it's hard to argue that this wasn't the right call. For me, personally, it's a bit disappointing to have planned around riding the events that I had to qualify. We changed my race programme to do the Ardennes to try to qualify for Australia, so it's a big shame but I can totally understand the rationale behind it."

NTT Pro Cycling's Victor Campenaerts, the Hour Record holder and one of the favourites for the Olympic time trial, was not surprised by the decision to postpone the Games.

"I think it's a good decision, and the only one that the organisers could really take. There were rumours about the Olympics taking place in November or December but I think that would be really too strange to have a summer Olympics in the winter," Campenaerts said.

"I think this is the best decision if you consider the bigger picture, which for now is greater than just the sporting world, and it's good that they've made that call right now. It's important for those athletes who put so much into their planning and preparation for the showpiece."