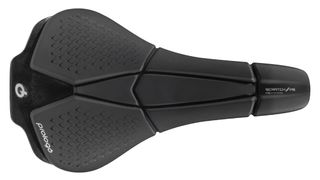 Prologo has updated its saddle line for 2020, with a new Scratch M5 and M5 PAS, along with the brand-new Dimension Tri saddle, featuring at the top of the revised model lineup.

The Scratch, which has long topped Prologo's range, has been given a substantial revamp with a shorter nose and a multi-section pad. Meanwhile, the Dimension Tri is a new addition to the product line and features a perineal channel and a short, broad nose.

A swathe of pro teams will be using the brand's saddles next season, including Astana, Bahrain-McLaren, EF Education First, Groupama-FDJ, UAE Team Emirates, as well as numerous Pro Continental and women's pro teams.

The new unisex Scratch M5 and M5 PAS (Perineal Area System) have seen their lengths slashed by 30mm for 2020, moving with the short-nose trend that has spread around the saddle industry in the past several years. Shorter saddles reduce the pressure on soft tissue while you pedal, and at 250mm in length, the M5 certainly fits into that trend.

The MSS (Multi-Sector System), which was designed in cooperation with the Milan Polytechnic University, also features. MSS refers to the sectioned nature of the saddle pad, with each section a different pad density. The system, designed to offer flexibility as the rider moves, is claimed to adapt to varying rider positions and the push-pull movement of pedalling.

The standard M5 features a soft centre section, in contrast with the rest of the saddle, which is carbon bottomed. Meanwhile, the M5 PAS is differentiated by its cut-out centre, which offers further soft-tissue relief.

A totally new addition to the Prologo line, the Dimension Tri is, as its name suggests, aimed at triathletes and time trialists.

In contrast to the M5's 'T' shape, the Dimension Tri features an ergonomic 'V' shape, which, in combination with a PAS channel, eases the pressure on those leaned forward in the time trial position.

Building on the already-existing Dimension saddle, the Dimension Tri has seen its seat area moved forward by 20mm to cater for those scooted-forward positions, while the nose is also 7mm wider to offer further support.

While the MSS isn't present on the Dimension Tri, the saddle instead features Prologo's patented CPC (Connect Power Control) technology. The tech is made up of small raised honeycomb sections of padding, which is claimed to increase grip and vibration absorption, as well as increasing airflow and wicking away heat and sweat.

The Dimension Tri NaCK CPC weighs in at 191g, while the TiroX version is 223g. Meanwhile, the CPC-less saddles come in at 181g for the NaCK version and 212g for the TiroX model.