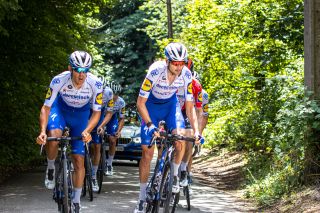 Deceuninck-QuickStep in training on the Tour of Flanders route this week (Image credit: Deceuninck - Quick-Step)

Professional racing is due to resume in Belgium on Sunday, July 5 with a kermesse in Rotselaar backed by the Vermarc Sport clothing company.

Deceuninck-QuickStep, Lotto Soudal and Alpecin-Fenix are among the teams due to participate, though their precise line-ups have yet to be confirmed.

The race will see riders tackle laps of a 15km circuit around Rotselaar and the organisation said that the event will comply with coronavirus restrictions in Belgium.

From July 1, a maximum audience of 200 people is permitted at sporting events in the country, though Vermarc Sport CEO Marc Verbeeck suggested that spectators would be allowed on the course as long as they remained 1.5 metres apart.

Naesen disappointed by reduction to Tour of Flanders distance

"The rules only allow 200 people, so we'll close the start zone and the finish zone will be for a few guests only," Verbeeck told Sporza.

"Along the course we'll tell people to keep their distance. But in theory there's 30km of space [both sides of the road over the 15km circuit – ed], so there's room."

The last race held in Belgium before the coronavirus pandemic interrupted the season was the GP Jean-Pierre Monseré on March 8, which was won by Fabio Jakobsen (Deceuninck-QuickStep). The first UCI event to take place in Belgium once international competition resumes will be Dwars door het Hageland on August 15.

Verbeeck said that the Rotselaar kermesse will be open to Belgian teams and riders, as well as foreign riders who are based in Belgium.

"Deceuninck-Quick Step, Lotto-Soudal, Alpecin-Fenix and Sport Vlaanderen-Baloise will be there. The other Belgian teams will probably also be there. Foreign riders living in Belgium will also be allowed to come," he said, though he declined to name specific riders: "I don't know anything about the exact riders who will come."

The 15km circuit will bring the peloton through Wezemaal, where the Vermarc company is based. The company supplies clothing to Belgium’s two WorldTour teams, Deceuncinck-QuickStep and Lotto Soudal.

"We live from this sport. It is very important for us that it starts up again," Verbeeck said.

"The idea was born two weeks ago when the new rules for sport became known in our country. We then started negotiating with the cycling federation and with the mayor of Rotselaar. He helped us a lot and now there's an agreement for a race on July 5."

The Belgian Classics were among the many races postponed as a result of the coronavirus pandemic, though the majority of them have now been rescheduled for the Autumn, with the Tour of Flanders, Liège-Bastogne-Liège and Gent-Wevelgem all part of a revised October schedule.

While the international calendar will not resume until mid-July, a number of events at national level will have taken place in Europe before then.

Zdenek Stybar (Deceuninck-QuickStep) has already participated in a local race in the Czech Republic, while the Slovenian national championships road race will take place on Sunday.

On Friday evening, Slovenian and Italian riders, including Tadej Pogacar (UAE Team Emirates) and Alessandro De Marchi (CCC Team) will participate in a criterium in Ljubljana.