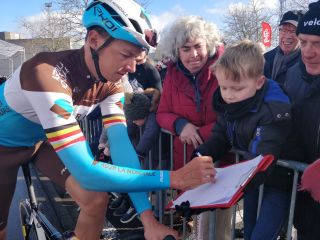 Oliver Naesen (AG2R La Mondiale) has expressed disappointment that the 2020 Tour of Flanders has been reduced in distance by some 26km for its rescheduled October 18 date.

The 2020 Ronde was originally due to be 267km in length, as was the case in in 2019 when Alberto Bettiol emerged victorious, but the Tenbosse and Muur van Geraardsbergen have been excised from the revised route, which was confirmed on Friday. The new route includes the Valkenberg and is 241km in length.

“It’s a pity,” Naesen told Sporza. “In a race of 260 kilometres, you have to do your best just to be able to finish at the front. Those long races are really the only thing I can do well.”

Three of Naesen’s five professional wins have come in events of more than 200km in length – the Bretagne Classic in 2016 and 2018, and the 2017 Belgian Championships – while his powers of endurance also carried him to second place at the 2019 Milan-San Remo. Naesen maintains that the additional distance makes a huge difference to the list of contenders in a Monument.

“A rider who's the best over 200km won't necessarily win a 260km race, because that 200km limit exists,” Naesen said. “Sometimes after 198km, I see riders next to me on a climb and then 4km later they’ve come to a standstill.

“For me, these races are about the survival of the fittest. That's why I think it's a shame, although I might speak differently at the end of October.”

As well as reducing the Tour of Flanders to 241km, Flanders Classics has also reduced the distance of Gent-Wevelgem to 238km, cut De Brabantse Pijl to 184km and reduced Scheleprijs to 183km.

Some of the changes, such as the elimination of the crossing of the French border at Gent-Wevelgem, were introduced in light of the coronavirus pandemic that forced the postponement of the Classics from the spring. In a statement on Friday, Flanders Classics stated that it had also taken into consideration the compressed nature of the rearranged Autumn calendar.

“To provide the teams and riders with enough opportunity to rest between the races that will follow each other in rapid succession in October, Flanders Classics has decided, in consultation with various teams, to slightly shorten the distance of its races,” the organiser said.