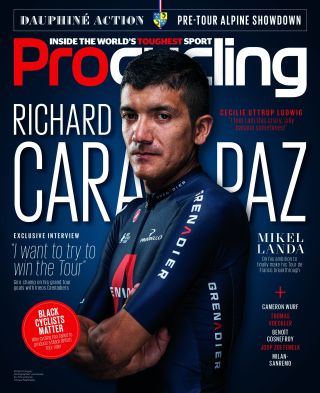 Richard Carapaz was a surprise pick for Ineos Grenadiers at the Tour de France this year, after being drafted into the team last minute to make his debut, in his first year racing with the British squad.

The Ecuadorian put his country on the map in the cycling world with his victory at the Giro d’Italia last year, but was already charting new territory as the first rider from the South American nation to make it to the WorldTour when he turned pro in 2017. The 27-year-old was due to defend his title in Italy next month, but was drafted into the Tour, with Geraint Thomas instead going to the Giro.

Speaking to Alasdair Fotheringham, exclusively for Procycling, Carapaz said: “I can’t always say it’s going to be all Giro, Giro, Giro for the rest of my career, because if I don’t know what the Tour is like, then I can’t say what I think of it. I’d like to go, and if I see it’s favourable, then I’d like to try and win it.”

As part of our autumn sale, a subscription to Procycling magazine currently costs £5 for the first five issues (UK offer only) – that's only £1 per issue.

Also in this month’s magazine is an interview with one of the stars of the female peloton, Cecilie Uttrup Ludwig. The Dane spoke to Sophie Hurcom about her FDJ Nouvelle-Aquitanie Futuroscope team, and why she’s enjoying the atmosphere at the French squad which she joined this year.

Uttrup Ludwig is known for her exuberant personality on and off the bike and she also talked about what it’s like when her post-race interviews have gone viral. Uttrup Ludwig said: “I am that way because that is me in that moment, that is me when I’m super happy. I think people, in time, they will also see when I don’t do well, I will not give a crazy interview.”

There’s coverage of the return to racing after the pandemic, with Peter Cossins providing analysis of a particularly tough and unique edition of the Critérium du Dauphiné. The traditional Tour warm-up race was trimmed down to just five days but featured 27 categorised climbs, and 18 of the top 20 finishers from last year’s Tour on the startline.

In 2020, the Black Lives Matter movement has come to the fore, beginning in the US after the killing of George Floyd in May. In cycling particularly, the lack of racial diversity is vastly evident, with just one black rider out of the 178-rider peloton starting the Tour this year. Dr Marlon Moncrieffe, a former elite level British racer and academic, explores why there has never been a black British rider at the Tour de France, and when this may change.

Also in the magazine, there are interviews with one of the stars of the Tour de France, Mikel Landa. The Basque rider spoke to Sophie Hurcom about being the number one at Bahrain-McLaren.

Landa, currently in the top-10 on GC at the Tour, said: “For me, it’s really important to have the support of all of the team on the road and out of the road.”

Another rider who has gained attention during the first half of the Tour is Benoît Cosnefroy, with the Frenchman having a spell in the polka dot jersey. Cosnefroy spoke to Edward Pickering about his aggressive riding style, and how he puts all of his energy into bike racing. He said: “I want to give everything physically and I want to regret nothing.”

Elsewhere, Cameron Wurf made a surprise return to the WorldTour at Ineos this January, after leaving cycling in 2014 to pursue a career as a triathlete. The Australian was called up as a replacement for Vasil Kiryienka, and told Nick Busca about what it has been like returning to the top of the sport.

One of the few French riders of the past 20 years to wear the yellow jersey, Thomas Voeckler is used to being asked about the Tour de France. The French barrodeur spoke to Adam Becket about his favourite moments in his Tour history.

Plus, catch up with our diarists and hear the thoughts of our columnist Laurens ten Dam among all the regulars.