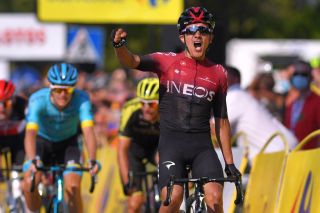 Richard Carapaz may have been drafted into the Tour de France at the eleventh hour having previously been scheduled to defend his Giro d’Italia crown but the climber has put his complete faith and backing behind his Ineos Grenadiers teammate Egan Bernal.

Bernal comes into the Tour de France as the defending champion but abandoned the Critérium du Dauphiné due to a back injury. The Colombian told reporters on Friday that he is still recovering from his injuries but that he intends to lead Ineos’ Tour challenge over the coming weeks.

“First of all, I think Egan is in top condition,” Carapaz, who was signed over the winter from Movistar, told the media.

“We’ll see day-by-day what happens in the Tour, and then decisions will be taken. Right now I can’t say if I will lead or not, but I think the leader is good, and we’re going to get behind that until we have to do otherwise.”

Carapaz looked good in the Tour of Poland earlier in August, winning a stage before he was forced to leave the race after a crash. His form is clearly on the up, however, after he was drafted into the Tour team at the expense of Chris Froome and Geraint Thomas.

“The truth is that this year has been a unique one. I was lucky enough to be able to train well back home, and that’s partly why I’m here. I’m in decent form, and the team saw that, and that’s why we decided to come here. It’s a big change but it’s the biggest race a cyclist can do in the world, so in that sense it’s a big opportunity,” he said.

However, there are no plans, according to Carapaz, for his role to become more than a helper at this stage. “That has not yet been proposed nor even thought about. We think Egan is good, and we will get behind him until the end. Then, in the day-by-day, according to how the race unfolds, we’ll see if we have to make a plan B.”

With Froome and Thomas left at home, Carapaz’s inclusion adds to the growing Latin American influence within the team. Bernal was at pains to emphasize that the squad remained British at its core during his pre-race press conference, with Carapaz echoing those sentiments.

“I can’t really compare it to previous years – this is my first year on the team, and I’ve only recently started getting to know the team. What’s certain is that it’s an English team and the language is English. We may have more Spanish speakers, but I think it will always be the original language of the team. With Egan, we’ve had certain encounters in Colombia at the races, and we have a good relationship.”