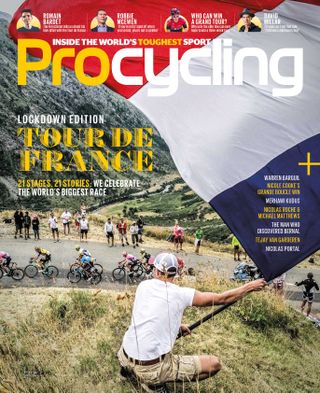 July is normally full of the joy of the Tour de France, but with the global pandemic forcing the postponement of cycling’s biggest race this year, this month’s new issue of Procycling celebrates everything about the Tour through our 21 stories, one for each stage of the race.

There are interviews with some current cycling stars, as well as former champions, analysis on who can actually win the Tour, and in-depth features on different aspects of La Grande Boucle.

Romain Bardet, one of France’s great hopes in the Tour, spoke to Edward Pickering about his relationship with the race, having contested it every year since 2013 and previously finished in second and third. He also explains how he will approach the race when it begins again in Nice this year.

We need to talk about Kévin

“Every year in the Tour, I have a story to tell. I’ve never been a spectator,” Bardet said. “I’m always involved. I’ve been on the podium five times in Paris, and even with a difficult Tour last year, I won the climbers’ jersey. I’m sometimes good, sometimes it’s the opposite, but I’m never neutral in the Tour.”

Another Frenchman who has impressed at the Tour before, Warren Barguil, spoke to Alasdair Fotheringham about how he fits into Arkéa-Samsic now that he has been joined at the team by Nairo Quintana. Barguil won the Tour’s polka dot jersey in 2017 and finished last year’s race in 10th.

“When I know somebody is better than me then I give them 100 per cent,” Barguil said. “But, if I’m better than them, then it’s harder for me to do that. If you know the team leader is at 60 per cent and will lose three minutes and you know that you can have the leader’s jersey in a race, I think the team needs to be open-minded. They will need to let you make a move.”

Robbie McEwen, the now retired Australian who won three green jerseys, casts his eye over the current crop of elite sprinters, picking out the strengths and weaknesses of Caleb Ewan, Sam Bennett, Dylan Groenewegen, and the rest.

McEwen told Procycling: “To beat these guys, the only way is to be on one of your best days. It’s the same for all of them - for them to win, it’s a question of who is on their best day? Who is closest to 100 per cent and who gets the best run? Quite often a sprint comes down to who gets the best run.”

Team Sunweb duo Nicolas Roche and Michael Matthews are not only team-mates, but friends, neighbours and training partners. Sophie Hurcom spoke to the pair about competing against each other in training, mistaken identities when they first met, and their relationship with the Tour.

Matthews said: “Nico definitely climbs much better than me but I’m probably faster, so we can race in all different aspects that pushes both of our abilities to get better in the probably quite weaker sides of our performance.”

EF-Education First’s Tejay van Garderen talked about living up to expectation at the Tour de France, having won the white jersey for best young rider in his first years. Sophie Hurcom looks back at Nicole Cooke’s 2007 win on Mont Ventoux in the yellow jersey at Grand Boucle Féminine Internationale and David Millar looked back to his win on the opening day of the Tour, 20 years on.

Elsewhere, Merhawi Kudus talks about being one of the first two black African riders to appear at the Tour, Andy Schleck reflects on his Tour victory 10 years after it happened, and there’s a tribute to Nicolas Portal, the late Team Ineos directeur sportif.