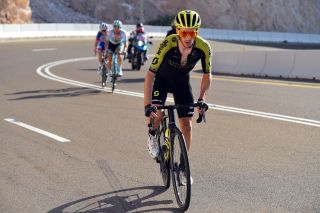 Adam Yates (Mitchelton Scott) kick-started his 2020 season with a resounding win on stage 3 of the UAE Tour to take all but complete control of the race.

The British climber blew all of his rivals away on the summit finish of Jebel Hafeet after dropping the last survivors from the lead group with 5km to go. Despite a late fightback from pre-race favourite Tadej Pogacar (UAE Team Emirates), Yates extended his lead at the line by over a minute on the second-placed Slovenian. Although the race climbs the same ascent on Thursday's stage 5 Yates looks in complete control, even with the threat of crosswinds on stage 4.

It was a case of practice makes perfect for Yates who arrived in Dubai several days ahead of the race, and revealed to Cyclingnews during an exclusive podcast that he had made the journey ahead of schedule to properly preview the long 10km ascent.

Yates appeared to attack far too early when he launched his first move with 6km to go but when he was joined by David Gaudu and Alexey Lutsenko it was clear that the trio was in no mood for waiting around. Yates's second attack saw off his two companions, and while Pogacar managed to cut Yates's lead to around 20 seconds at one point, the gap only grew in the closing kilometres, with Yates putting 1:03 into the UAE man. Yates leads Pogacar by 1:07 in the overall standings, with Lutsenko trailing by 1:35 and Gaudu by 1:40.

"I knew it was tough and they were really tough conditions," Yates said after the finish.

"It was saying 37 and 38 [degrees] on the Garmin all day. It was really hot. I just want to say thanks for the team for supporting me. It's the first race of the season and you never really know how you're going. You know that you feel good in training but racing is a lot different. They supported me and trusted me, and here we are with the win.

"I came to look at the climb two or three days before the race, and that helped, to know the climb and know the gradient. It's paid off."

When the race reached the final ascent it was CCC Team who set a frantic pace for their man Ilnur Zakarin. UAE Team Emirates and Bora-Hansgrohe still had numbers as the lead group began to shrink but it was Yates who put in the most significant and telling attack.

"I knew that I wanted to go early because it was a little bit windy, and sometimes when it's like that no one wants to come through and work. I just wanted to test the legs and see where I was. I went full gas and luckily no one came with me. It wasn't planned at all. There were a lot of games being played but I chose my moment."

Stage 4 – on paper at least – should be decided in a bunch sprint but there is a threat of crosswinds that could test Yates and his team as they look to protect their race lead. Then on stage 5, the race climbs to Jebel Hafeet once more. Yates will certainly not be given any freedom, and he may have to race tactically if he becomes isolated, but, judging by his display on Tuesday, he may also win for a second time this week.

"We've got this climb again and hopefully if I've got the same legs then I can do it one more time. I've heard tomorrow that there could be a chance of crosswinds. We'll have to watch out but like I've said, we've got a great team and a few big guys who will keep me out of the wind and keep me out of trouble," Yates said."

"Next time on the climb there will be more tactics involved and everyone knows everyone's conditions and level. I just hope that I have the same legs."