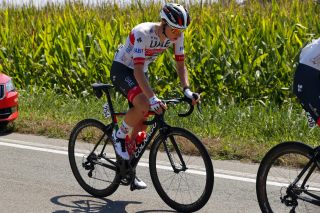 Tadej Pogacar will lead the UAE Team Emirates squad at the Critérium du Dauphiné this week, ably supported by Italian road race champion Davide Formolo, as the Slovenian puts the finishing touches to what will be his first Tour de France this summer.

Pogacar finished third at last year's Vuelta a España – his first Grand Tour – and although he's played down his chances for La Grande Boucle, the 21-year-old is nevertheless being considered among the favourites for this year's rescheduled Tour.

"I'm coming into the Dauphiné with some good race miles after my first time at Strade Bianche and Milan-San Remo. Both races were really unique and an amazing experience, and I was happy with my condition," said Pogacar, who finished 13th and 12th, respectively, at the recent Italian one-day Classics.

"Some of the stages here at the Dauphiné could suit me, but the principal aim is building up for the Tour de France," he continued, speaking on his team's website. "Formolo is also really going well at the moment, so we'll try to do something between us here."

'What have you got to lose?' The remarkable rise of Tadej Pogacar

Peiper: Pogacar is among the favourites for the Tour de France

Formolo finished second at Strade Bianche at the start of the month, and, as Pogacar suggested, may also get an opportunity to try for stage wins and a high overall placing at the Dauphiné, which gets under way in Clermont Ferrand on Wednesday, ahead of the Tour.

Other key riders starting the Dauphiné who are coming to form nicely include Richie Porte (Trek-Segafredo), Mikel Landa (Bahrain McLaren) and Arkéa-Samsic's Nairo Quintana, , while Groupama-FDJ will be led by Thibaut Pinot.

However, the likes of Pogacar and his UAE Team Emirates teammates will be doing their utmost to make themselves seen in such a key race; whoever can come out on top – or near the top – at the Dauphiné will have a distinct psychological advantage going into the final two weeks before the start of the Tour de France in Nice on August 29.