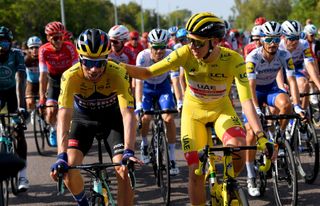 It wasn’t so much what they said as the way they said it. Neither Tadej Pogačar nor Primož Roglič is the most loquacious of riders, and the medium – a Zoom webinar over a patchy internet connection – hardly lent itself to detailed answers, but the Slovenian pair presented a united front ahead of a World Championships road race that comes on the heels of their intense duel at the Tour de France.

When the music abruptly stopped for Roglič on La Planche des Belles Filles last Saturday, Pogačar was left wearing the yellow jersey that the older man had carried for almost two weeks. Roglič was magnanimous in his congratulations immediately afterwards, and again in Paris on Sunday, but one wondered if the trauma of defeat was softened or heightened by listening to his national anthem fete a compatriot on the Champs-Élysées on Sunday evening.

There was no unease on show on Thursday evening, however, with Roglič and Pogačar jokingly rotating positions in front of a laptop in their hotel as they fielded questions about their prospects in this weekend’s World Championships.

A note from the Slovenian federation beforehand emphasised that they wished only to discuss the forthcoming race, but it was impossible to ignore that Pogačar and Roglič had contested the greatest prize of all in the tensest of circumstances just days previously.

“I am still probably a little recovering after the Tour, but there are some more days left so hopefully I am at my best on Sunday,” said Roglič, without specifying if the greater fatigue was mental or physical.

Pogačar, for his part, confessed that he was still absorbing the fact that he had won the Tour at the first attempt. “My head is all over the place this week,” he admitted. “But I think I’m ready for a hard race on Sunday.”

From Puy Mary onwards – or perhaps even from the Pyrenees onwards – the Tour was distilled to a prizefight between Roglič and Pogačar. The Jumbo-Visma man looked destined to win on points only to be dealt a knock-out blow by the youngster on the penultimate day. Pogačar insisted, however, that the duo could combine well together in Italy.

“I don’t think there will be any problems on Sunday,” Pogačar said. “We are a good team, we understand each other. We work together well, so I think we will have a good Slovenian team on Sunday.”

When Stephen Roche won the Tour de France in 1987, he lined up in Villach at the end of that summer with the stated aim of helping Sean Kelly – who had beat a trail for him in the professional peloton – to claim Ireland’s maiden road world title a little over a month later. Instead, in a tactical finale, it was Roche who found himself unexpectedly in the winning move, while Kelly policed Moreno Argentin behind.

Unlike Ireland all those years ago, there is no stated leadership hierarchy for the Slovenian team, and it seems clear that both men have the aptitude to contest the rainbow jersey on a course that features some 5,000m of total climbing. Pogačar expressed hope that Roglič could become world champion but stopped short of suggesting he would be the team’s outright leader.

“I think this would be a fairy tale but there is a big competition on Sunday, it’s a bit different to the Tour de France. Like I said, before we have a strong team and we can try to compete for the rainbow jersey,” said Pogačar, who suggested that the race could be “maybe Slovenia versus the whole world: I think there a lot of countries who can play a role for the victory.”

Some of the most fancied names come from the Jumbo-Visma cohort that shepherded Roglič at the Tour, with Wout van Aert (Belgium) the consensus favourite and Sepp Kuss (USA), Tom Dumoulin (Netherlands) and George Bennett (New Zealand) also on hand in Imola.

“They were already really strong in the Tour, but the thing is, I think every guy will have a chance to win the World Championships before the start,” Roglič said. “The guys who did the Tour, I maybe expect them to have maybe something more, though we’ll be a bit tired.”

Roglič and Pogačar reconned the 28.8km circuit on Friday morning, though conditions are likely to be rather more testing during Sunday’s race, with rain forecast in Emilia-Romagna for much of the day.

“For sure, the weather will have a really big influence on the race,” said Roglič. “I think everything is possible, always, and especially because we don’t have our own [trade] teams behind us, it’s every country by itself. I think for sure it will be a full gas race and super interesting for the spectators to watch it.”

A silver medallist in the time trial in 2017, Roglič has made little impact in his three previous appearances in the Worlds road race, where his best placing was a distant 34th in Innsbruck two years ago.

This time out, thanks in no small part to Roglič’s position atop the UCI rankings, Slovenia line up with a full complement of eight riders – including Jan Polanc, Luka Mezgec and Janez Brajkovic – and, on recent evidence, a team capable of playing a role in controlling the peloton.

“We will see that on Sunday. The most important thing will for sure happen at the end,” Roglič said. “We have to race the way we can race at the end. If we have to control, we will do what we have to do. We’ll just see, I said, how the luck will be, how the weather is and how the race will go.”

In France, Roglič and Pogačar were stronger than all-comers and a feature of their duel was their skirmishes over bonus seconds. If both men were to reach the finish in a small group, it is unclear who would be the quicker. Roglič was content to keep the world guessing.