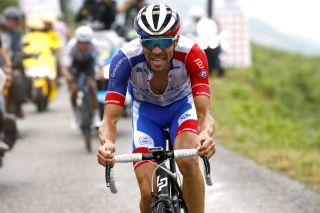 Thibaut Pinot says the priority during his first-ever appearance at the Route d'Occitanie is to measure the level of his form compared to his Tour de France rivals with four weeks still to go until the Tour's Grand Départ in Nice. "My goal is to see where I am compared to the others," he said at an eve-of-the-race press conference in Saint Affrique.

"Everyone will be motivated to be at a real race with a level worthy of the WorldTour. Come Tuesday evening we'll all be happy to have raced here," the Groupama-FDJ leader added. "The key thing is to confirm that my preparation is good and that I'm at the same level as my Tour rivals. While it's important to win, of course, it's not an obsession for me this week. The crucial thing is to get back into racing and rediscover my racing form as quickly as possible."

Pinot comes to Occitanie from a training camp in the Alps, where his preparation was stymied by a tooth infection. "The camp in the Alps didn't go as I hoped because I had an issue with one of my teeth and had to have root canal treatment," he explained.

"That extended across 10 days so the camp wasn't as straightforward as I was hoping it would be. I wasn't able to ride with the rest of the team as much as I had planned, I got tired pretty quickly. I couldn't ride with the intensity I wanted, so I'm a little behind where I wanted to be coming into the race, but it's not too much of a concern because the season is going to be full on from now on," the Frenchman said.

There was, he added, an upside to it, though. In a normal year, the setback would have occurred during the Tour de France. "If that had been the case, the Tour wouldn't have ended well again," he said with a rueful smile. "I'm glad that it's behind me. Although I'm a little bit behind where I wanted to be coming out of that training camp, I've still got a month before the Tour."

Pinot says he is still aiming for a high overall finish in Occitanie, with his focus particularly on the third stage, which finishes atop the Col de Beyrède. "I don't know the Beyrède, but a few of my teammates have ridden it and I've heard that it's a typical Pyrenean climb, and that everything is likely to be decided in the final 4km, which are tough," he said. "It's a real mountain stage that day, with the Peyresourde and the Port de Balès, which is also very hard, also featuring. It will be a good test."

Pinot's final preparation for the four-day race in south/south-west France was a recce on the Tour's Mont Aigoual stage. He's already seen what the stages in the Alps have in store, and said there were no real surprises apart from the new Tour finish on the Col de la Loze, above Méribel. "It's a real wall, the kind of test that you'd usually find in Spain or Italy, the kind of ramps that I really like, a place where no one will be able to hide," he said.

Asked by Cyclingnews for his impression of Remco Evenepoel's stunning victory at the Tour of Burgos the day before, Pinot admitted he wasn't surprised to see the Belgian winning. "I'm not surprised now to see that kind of performance, especially from him, as he seems to be capable of anything. It's not a surprise to some young guys like him winning, it's happening more and more frequently," he said.

"It could be that guys like him, Pogacar and even Bernal, who is still quite young too, aren't going to make the same kind of steady progression that older riders have made in order to reach the top. But they could also be real phenomena who are going to progress even more until they're 28. They could be an extraordinary generation," the Frenchman said.

Inevitably, the issue of COVD-19-related health measures came up, and Pinot said they would take some of the pleasure away from the return to racing, but are entirely necessary.

"I've seen personally what this virus can do and I'm happy to see measures like these on place," said the Frenchman, whose parents have both had the virus. "It's going to be a bit bizarre for the first few days, but by the time we get to the Tour de France I'm sure we'll all be used to these restrictions."