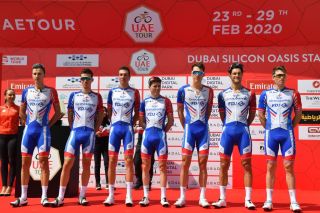 Groupama-FDJ line up ahead of the start of the 2020 UAE Tour in February (Image credit: Getty Images Sport)

French WorldTour team Groupama-FDJ will this week conduct three very different, separate training camps in the French Alps for their riders, in order to best prepare them for the restart to the 2020 season later this month. As the team explains, its riders have been sorted into three distinct groups at three distinct locations, dependent loosely on their season goals, dividing them into Tour de France candidates, sprinters and those riders taking on the one-day WorldTour races in early August.

Each group has one of the team's three coaches with them, and Julien Pinot will lead a two-part camp in the French Alps for what would at least appear to be the team's long list of 10 riders for the Tour de France.

Initially, Pinot explained on the team's website on Tuesday, the five climbers from the group – his brother Thibaut Pinot, David Gaudu, Rudy Molard, Sébastien Reichenbach and Valentin Madouas – will meet this week in Grenoble to do reconnaissance rides of some of the tougher stages to be used at the Critérium du Dauphiné (August 12-16) and the Tour de France (August 29-September 20).

After a few days, they'll join up with the remaining rouleurs from the group – Stefan Küng, William Bonnet, Antoine Duchesne, Matthieu Ladagnous, Tobias Ludvigsson – and will be based in a chalet at the ski resort of La Giettaz, close to the top of the Col des Aravis, to continue recon rides of mainly the finishes of more Dauphiné and Tour stages.

Madouas on Tour de France debut: There's pressure but we have an objective

Groupama-FDJ coach Julien Pinot: This season will be intense

"This is the last big block of work before the resumption [of competition]," Julien Pinot explained. "When the riders return home, there will be less than 10 days before the races begin, whether at the Route d'Occitanie [August 1-4] for most of the group, or at Strade Bianche [August 1] or the Tour de Pologne [August 5-9]."

"Since they will all have to race a Grand Tour during the year – namely the Giro d'Italia for Arnaud and his train – it's very important to work on some climbs, especially as, once the season starts, they'll be very busy and won't have the opportunity to do it," said Han.

"However, there are also some great valleys in this area, so we can therefore work on the sprint quite easily. It may sometimes be necessary to get over a climb to get back to the hotel, but the sprint theme will still be the most important aspect for this group," he said.

Anthony Bouillod will lead a camp for what the coach admits is a more eclectic group of riders, compared to the long-list Tour squad one at La Giettaz or the sprinters' camp at Le Grand-Bornand, but many of the riders at his camp in Morzine will need to be ready to hit the ground running for the one-day WorldTour races that happen in the first two weeks of August.

"We will gradually increase the workload, even if those who are racing Strade Bianche [August 1] will not necessarily need as much volume as those who'll do Milan-San Remo [August 8]," Bouillod said of what will be a seven-day training camp.

"The goal will be to work as close as possible, intensity-wise, to what we will see in competition," he said. "The races will likely be very fast, but all the riders will be ready and will have benefited from some good training conditions."