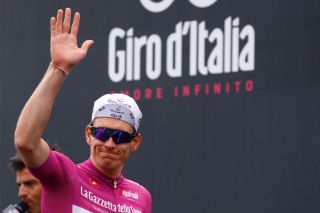 Sprinter Arnaud Démare will once again miss out on the Tour de France, heading instead to the Giro d'Italia for the second season in a row, while Thibaut Pinot will head up Groupama-FDJ's team for the Tour de France and the Vuelta a España, the team announced on Tuesday.

Last season, Démare won a stage of the Giro in Modena and battled Pascal Ackermann (Bora-Hansgrohe) for the points classification, eventually missing out on taking home the cicliamino jersey by a slim 13 points.

The 28-year-old is due to restart his season after the coronavirus stoppage in the Vuelta a Burgos (July 28-August 1) before heading to Italy for Milano-Torino (August 5) and Milan-San Remo (August 8).

Madiot: There will be no catch-up when racing starts

He will then head north for Tour de Wallonie (August 16-19) before taking on the French national championships, the Tour Poitou-Charentes (August 27-30), GP de Fourmies (September 13), Tour de Luxembourg (September 15-19) and Paris-Chauny (September 27). The latter overlaps with the UCI Road World Championships men's road race in Switzerland, a course presumably too hilly for Démare.

Démare started the season at the UAE Tour and was kept in quarantine at the Abu Dhabi race hotel for 11 days before finally being released after testing negative for COVID-19. He had a minor setback during the lockdown when he fractured his wrist in a mountain bike crash.

He's expected to vie for the points classification and stage wins in the Giro d'Italia when it starts on October 3. RCS Sport have yet to announce the location of the Grande Partenza, but it is likely to be a time trial in Palermo, with additional routes in Sicily replacing the cancelled three stages in Hungary.

After abandoning the 2019 Tour de France in tears while sitting in fifth place overall because of a thigh injury, Thibaut Pinot will return as Groupama-FDJ's leader for the Tour when it starts in Nice on August 29.

Pinot will restart his season in La Route d'Occitanie (August 1-4) before taking on the Critérium du Dauphiné (August 12-16) and French Championships.

The 30-year-old had a strong start to the 2020 season before the coronavirus halted all the races, with top 10s overall in the Tour de la Provence, Tour des Alpes and Paris-Nice.

In 2019, Gaudu was a key domestique for Pinot and finished 13th overall. He will follow the same programme as Pinot except will race the Vuelta a Burgos instead of La Route d'Occitanie.

Gaudu and Pinot will also take on the shortened Vuelta a España, which begins October 20 in the Basque country.

Küng will begin his season with the Swiss time trial championships, which will be held on the Worlds circuit in Aigle, before heading to Strade Bianche and Milan-San Remo. After the Dauphiné and Tour de France, he will refocus on the Classics: Gent-Wevelgem, Scheldeprijs, Tour of Flanders and Paris-Roubaix.