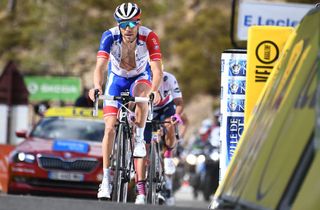 Groupama-FDJ's Thibaut Pinot declared himself satisfied with his fifth place overall at Paris-Nice, which finished a day earlier than originally planned on Saturday due to the ongoing coronavirus crisis, and which could now be one of the last professional cycling events for a number of weeks or months.

"If you'd told me that I'd take fifth place overall at Paris-Nice before the race, I would have taken that," Pinot told French newspaper L'Equipe on Sunday.

"Nairo Quintana [Arkéa-Samsic, and final-stage winner] was a cut above the rest, as he has been since the start of the season, and the rest of us were just doing what we could."

Finishing third on the seventh and final stage was, he admitted, "reassuring", while Bora-Hansgrohe's Max Schachmann took the overall title after winning the opening stage and protecting his lead for the rest of the race.

Thibaut Pinot: I need to be patient

"I'm happy," Pinot said. "I'm pleased with the result – especially after the bad sensations and condition I had coming out of the Tour des Alpes Maritimes et du Var."

Pinot won the 2019 edition of the smaller, four-day French stage race, but two weeks ago he could only finish seventh overall, 2:22 down on dominant overall winner Quintana.

Pinot planned to again target the Tour de France this summer but with races cancelled or postponed, he can only think ahead to whatever the season brings. He felt fortunate to have at least raced in recent weeks.

"Now, it's all about resting and working towards regaining form for the 'second half' of the season," said Pinot.

"With the altitude training camp I did [ahead of the season], I've been going all-out since mid-January. I've had a good block of racing, and now I need to rest.

"It's a much worse situation for those riders who haven't yet raced," he continued, referring to the cancellation and postponement of so many events.

"I was 'lucky'. But let's see how long this lasts," said Pinot, referring to the enforced break due to the coronavirus.

"Hopefully the situation will resolve itself as quickly as possible."