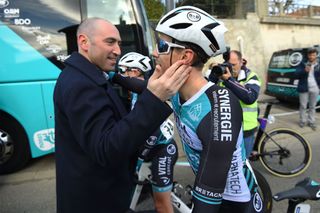 On Tuesday, B&B Hotels-Vital Concept team manager Jérôme Pineau called a virtual press conference to announce his 10 long-listed riders for this year's rescheduled Tour de France. But the Frenchman also talked about the fears he'd had for both his ProTeam-level squad and cycling as a whole during the coronavirus-pandemic shutdown of the sport.

"I was afraid for the survival of my sport, because we weren't the only team having to go through such difficult times," Pineau said, according to L'Equipe. "I don't know many teams, apart from those who live on petrodollars, who can ask their partners for millions of euros without giving them visibility at races – especially without the Tour de France. When the Tour looked to be in danger of not happening, we were all scared. Were we going to have to shut up shop?

"In the end that wasn't the case, but some changes had to be made," he said. "An economic crisis hurts the rich and kills the poor: when your partner is a hotel chain, which at the start of confinement had an occupancy rate of close to zero, you can imagine what the consequences could be."

With the sport's governing body, the UCI, having announced a rescheduled calendar for the rest of the season, with postponed races given new, somewhat unusual time slots – the Tour has been rescheduled for August 29-September 20, while the Tour of Flanders and Paris-Roubaix are set to take place in late October – there's still no guarantee that the sport's major events will yet take place, despite many isolation measures having begun to be lifted in Europe in recent days.

De Backer: How stressful will this period have been for riders?

"Fortunately, the UCI has ensured that the order of the races taking place makes sense from a travel point of view," said Pineau. "Our staff will be heavily involved: some will have to become security guards or health officials... We had to put the guys on partial unemployment for two-and-a-half months, and now we're going to be asking them to do a third more work than normal.

"But I know I can count on them, even though these are special circumstances: reconnaissance trips with only five riders, and massages using gloves and masks," he said.

"We've also established a health system around the boys: all the riders and all the members of the staff will have to pass serological [blood] tests, and the usual gatherings of the whole team will not take place," explained Pineau.

"Yesterday [Monday], we established a list of 10 riders preselected for the Tour de France, divided into two very distinct groups that will prepare separately to respect the ruling of having only 10 people gathered in the same place.

"We'll also avoid public transport and encourage travel in our team vehicles, even if it might be a bit of a headache [to organise]," he said.

Pineau also said that he believes the lack of competition since March means that when and if WorldTour-level racing recommences with Strade Bianche on August 1, the riders are going to be raring to go.

"They haven't been able to race for two-and-a-half months, and so will be motivated like never before," he said. "Competition will be at a very high level, I'm sure. Racing's going to be fast.

"What will have changed will be the approach – an absence of altitude training camps and exotic trips to train on volcanoes," said Pineau, referring to riders, particularly from Tour de France favourites Team Ineos, who regularly choose to head to place like Mount Teide in Tenerife, Spain, to train at altitude to prepare for races like the Tour, but for whom it may not be possible this year.

"Some team leaders will have less juice in the third week, and the teams will be less homogeneous," he suggested. "Perhaps some teams will still be worried about the virus and won't go to certain races, while races might also be a bit more open because the big teams won't have the same power to control everything."