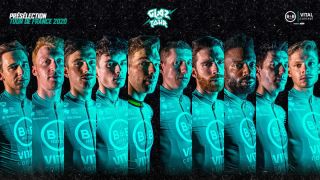 B&B Hotels-Vital Concept have named a ten-rider long list for their debut at the Tour de France including sprinter Bryan Coquard and veteran climber Pierre Rolland. The Tour has been rescheduled from July to August 29-September 20, with B&B Hotel-Vital Concept one of the four ProTeams awarded a wildcard invitation by organisers ASO.

Team manager Jérôme Pineau revealed the names on the long list in a virtual press conference in Brittany on Tuesday. He explained that riders will work in two separate groups for sprinters and climbers as they prepare for the Tour and seek to comply with French health regulations aimed at reducing the risks of the COVID-19 coronavirus pandemic.

"We will be working with these two groups from June," Pineau said, according to L'Equipe. He explained the medical protocol and training plans for the team. Each group will be followed by two dedicated directeurs sportifs and staff, with travel done using team vehicles rather than public transport.

"The list is not finalised. We know it's been a unusual moment and that things could be difficult for some and this list could spark a reaction by some riders. 10 riders will take part in the stage reconnaissance divided into two groups but a dozen riders are still in with a chance for the Tour."

"To limit the risks of contagion, the groups will not all come together for the reconnaissance of the Tour stages, they'll be divided into the sprint and mountain groups. They'll only meet up in mid-July in the Pyrenees to work together. We hope that the calendar drawn up by the UCI will be go ahead and we hope to be ready to race."

Coquard is expected to return to racing at the Route d'Occitanie (August 1-4), while Rolland will ride the Tour de l'Ain (August 7-9). The two leaders should then join forces for the Critérium du Dauphiné (August 12-16).

"Arthur is affected by a viral problem. He's carried out numerous tests but has yet to undergo additional examinations. Unfortunately, with the lockdown, everything has been put back," Pineau explained.

"My first post-confinement trip was to see him at home so that we could discuss what to do. For the moment, he is unable take part in any races."