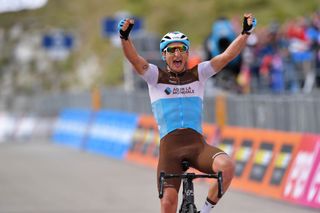 AG2R La Mondiale's Nans Peters is able to train on the roads of France once more after the partial lifting of the nation's coronavirus lockdown measures, and is now fully focused on trying to secure a place on his team's squad for the rescheduled Tour de France at the end of August.

Peters took a memorable solo stage win at last season's Giro d'Italia – his first time riding the Italian race, and only the second three-week race of his career after also having ridden the 2018 Vuelta a España – and now hopes to complete the 'Grand Tour set' by lining up for AG2R at the Tour in Nice on August 29.

"It's the biggest race in the world – the one that all professional cyclists dream about," the 26-year-old Frenchman said in an interview with L'Equipe, published on Wednesday.

"The competition within the team to get there tougher than ever this year due to all the race-programme changes," he said. "But that's my goal; I hope to be there."

Having turned professional with AG2R La Mondiale in 2017, after coming up through the ranks from the Chambéry Cyclisme Formation 'feeder team', Peters' Giro stage victory on stage 17 from Commezzadura to Anterselva – his first professional win – confirmed all the promise he'd previously shown team manager Vincent Lavenu, and came on the back of wearing the white jersey as the race's best young rider for three days midway through the race.

"The Giro is the thing everyone talks to me about. It was my first victory – and at a Grand Tour, at that – and it was massive," said Peters.

"I was really in very good shape. I slipped into the breakaways and came up with the white jersey, and so then from there I had nothing to lose. I had already successfully completed my Giro, so that's why I tried attacking on the stage from a long way out, and it paid off," he recalled of his winning move with 15km to go, when he left behind his companions from what was an 18-rider breakaway.

AG2R sports director Arturas Kasputis revealed afterwards that Peters had done a reconnaissance of the last part of the stage ahead of the Giro, and was certain that it had paid off. Earlier this week, AG2R posted a video on Twitter from Peters of him doing a reconnaissance ride of stage 4 of the 2020 Tour de France.

That, his Giro stage win last year and the fact that Peters signed a three-year contract extension with his French WorldTour squad at the end of last season, which will keep him with Lavenu's team until at least the end of 2022, all suggest that his goal of riding this year's rescheduled Tour is certainly realistic.

"A stage victory at the Tour de France would be the out of this world – the real high point of anyone's career. Of course, it's still just a dream," he said, "but I think I would be given opportunities.

"I'm not sure whether I'd get 100 per cent freedom, or whether there'd also be an aspect of me working for the team for the general classification," said Peters, presumably referring to the goals of team leader Romain Bardet. "It's still all to be decided."

For all that Peters hopes to be part of AG2R's plans for the Tour, the race – and the planned season – has to actually happen, and there's still a large degree of uncertainty as the coronavirus pandemic remains a concern.