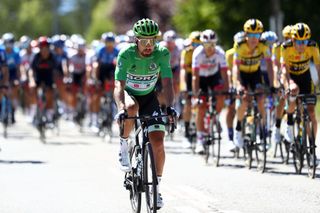 Peter Sagan (Bora-Hansgrohe) gave up nine important points and dropped to second place in the green jersey competition on stage 5 of the Tour de France on Wednesday but gave no indication that he is concerned that he might not extend his overall points classification record to eight this year.

Irishman Sam Bennett (Deceuninck-QuickStep) traded his national champion's kit for the green jersey after winning the intermediate sprint bonus in l'Épine after 47.5km of the 183km stage from Gap to Privas while Sagan could only manage fourth. On a day where a breakaway should have been able to go clear and sweep up some of the more valuable positions, that was a big blow for Sagan.

At the finish, the Bora-Hansgrohe rider followed the lead-out train of Team Sunweb after being dropped into position by Daniel Oss, but again, Bennett was faster and dashed around Sagan before the line to take third on the day behind stage winner Wout van Aert (Jumbo-Visma) and Cees Bol (Sunweb).

"It was OK - we went in the front, Daniel put me in good position. In the end Van Aert won with a nice sprint and I was fourth, which is OK. Sunweb have a good train - they demonstrated this in the days before. They did well."

Sagan has spent 127 days leading the points classification at the Tour de France over the course of his career. Most years he's taken the jersey after two or three stages and held it through to Paris. He traded back and forth with André Greipel and Mark Cavendish in 2015 and 2016, respectively but went on to win a total of seven Tour de France overall points classifications in the last eight years, only missing out in 2017 after being ejected from the race.

When asked if there was something wrong on Wednesday, Sagan shrugged: "It's only the fifth day. We arrive for a bunch sprint and I lose some points but I still got some points. The Tour de France is long and the climbing stages are coming. I have to be relaxed."

Having Bennett take the green jersey from Sagan will be consolation for Deceuninck-Quickstep, who lost the overall race lead after the jury penalized Julian Alaphilippe for taking an illegal feed inside the final 20 kilometres. Alaphilippe dropped out down to 16th overall, now 16 seconds behind new race leader Adam Yates (Mitchelton-Scott).