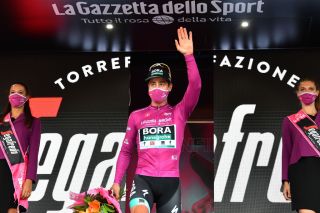 Faraway, so close. A few bike lengths in Agrigento, a few millimetres in Villafranca Tirrena. Different margins, same result for Bora-Hansgrohe's Peter Sagan at the Giro d'Italia. Same reaction too.

His maddening sequence of near misses continued with second place to Groupama-FDJ sprinter Arnaud Démare on stage 4 of the Giro d'Italia, but the Slovakian bore the defeat with good grace on Sicily's Tyrrhenian coast.

"Now I've almost had more second places in my career than first places," Sagan deadpanned when he took a seat afterwards in RAI television's booth behind the podium.

"But sprints are like that. Sometimes you manage to win by a centimetre, other times you lose by a centimetre. There's nothing to say. I did my best, and so did the team. They did a lot of work on the climb and in the end, we got to the finish with a lot of other sprinters like Elia Viviani and Démare."

Peter Sagan on voyage in the dark at Giro d'Italia

Giro d'Italia: Wackermann taken to hospital after TV helicopter accused of blowing barriers into the road

For the record, Sagan's 113 victories still top his 105 second-place finishes in the professional ranks. Indeed, when he flashed across the finish line on the Lungomare Cristoforo Colombo on Tuesday, it initially looked as though he might have done enough to notch up his 114th win and break a 454-day duck dating back to last year's Tour de France.

Sagan's Bora-Hansgrohe team had looked to take advantage of the category 3 climb of Portella Mandrazzi midway through the 140km stage from Catania to rid the peloton of some of the most dangerous fast men. "We all knew that Bora were going to push on the climb in the middle of the stage," said Michael Matthews (Sunweb), 7th on the stage.

Thanks to Matteo Fabbro's pace-making, Bora-Hansgrohe succeeded in jettisoning Fernando Gaviria (UAE Team Emirates) and Álvaro Hodeg (Deceuninck-QuickStep) out the rear of the peloton, but there was still a large contingent of sprinters in contention come the finish.

Sagan marked his former Liquigas teammate Elia Viviani (Cofidis) in the closing kilometres before opening his effort with 200 metres to go, but Démare and Davide Ballerini (Deceuninck-QuickStep) drew level and the three riders threw their bikes at the line almost in unison.

After a lengthy study of the photo finish, the commissaires awarded the stage win to Démare, with Sagan given the nod for second ahead of Ballerini.

"In the end, I did what – second or third? Second? That's ok, it's the fourth stage," said Sagan, who appears to be warming to his task in his Giro debut after a frustrating outing at the Tour de France, where he conceded the green jersey to Sam Bennett.

Thanks to his two second-place finishes on two very different finales in Sicily, Sagan has also moved into the maglia ciclamino of points classification leader.

Given his ability across all sorts of terrain, the classification should inevitably sharpen into focus as on objective as the race progresses through southern Italy over the remainder of the week – "I'll try to keep it" – but the 30-year-old's immediate focus is on getting across the line first before the Giro is out.

Sagan shrugged when it was put to him on RAI's Processo alla Tappa analysis show that his luck would have to turn sooner or later. "Luck, well, we'll have to see if I find it," he said.