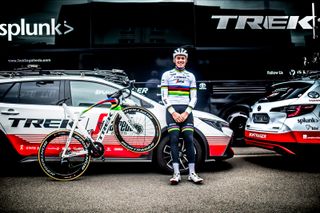 Mads Pedersen will stay with Trek-Segafredo until at least the end of 2022 (Image credit: Trek)

Mads Pedersen has signed a contract extension that will see him stay with Trek-Segafredo until at least the end of the 2022 season.

The 24-year-old Dane, who became road race world champion in Yorkshire in September, joined the Italo-American WorldTour outfit in 2017 after starting his career at the lower-level Cult Energy and Stolting teams.

In April 2018, after placing second at the Tour of Flanders, Pedersen signed two-year extension to his original contract, taking him through to the end of the 2020 season. Now wearing the rainbow bands of world champion, team manager Luca Guercilena has moved even earlier to secure his services for 2021 and 2022.

"Luca really believed in me three years ago when I first signed with the team. In fact, even in the previous year before that, when I was in a bit of trouble with Cult and Stölting, he had already showed great confidence in me when he told me I would have a contract if the team closed," Pedersen said on Wednesday.

"That team continued for one more year so I stayed with them but I was really happy that Luca gave me the confidence already back then. It was a huge factor in re-signing with the team now."

Mads Pedersen: I’m still hungry and this is just the beginning

Guercilena is keen to continue working with Pedersen.

"It's very important for us to have the opportunity to work with Mads for another couple of seasons. Having discovered him when he was a young talent and developing him into a world champion has been hard but deeply rewarding work and I believe this gives us the confidence in a bright future," the Italian team manager said.

Pedersen has won 10 races for Trek-Segafredo, starting with the Danish national road race title in his first season and including the Tour du Poitou Charentes, Tour of Denmark, Tour de l’Eurometropole, GP d’Isbergues, and a stage at the Herald Sun Tour.

His breakthrough moment came at the 2018 Tour of Flanders behind a rampant Niki Terpstra, when he produced a memorable display to finish second.

The 2019 Classics were largely a disappointment for the Trek-Segafredo team as a whole, but Pedersen bounced back later in the year to win the world title in miserable northern English conditions.

"I want to keep winning races,” said Pedersen, who will target the Classics this year before making his Tour de France debut. He made his 2020 debut at the Tour Down Under, helping Richie Porte secure overall victory with some vital support work.

“I want to be more consistent and more on the top level in the Classics, not just the big races but in all the races, instead of popping up occasionally. That's my main goal right now and then, of course, to honor and show respect for the rainbow stripes,” Pedersen said.

Guercilena agrees with those ambitions.

"He is a winner and has a winning instinct and I firmly believe is on his way to be successful at the Classics," he said.

"Last season he had a hard time, but I trust that after the win at the Worlds, he will be more confident in his abilities, and I believe he will obtain great results during the upcoming seasons."