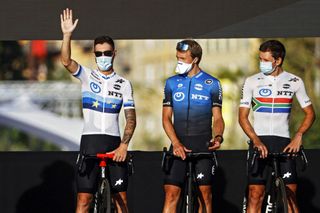 Nizzolo won the Italian title last weekend, and then took his European champion's title just three days later in Plouay, France. The 31-year-old now hopes to use what is clearly good form to take the opening 156km stage of the Tour around Nice this weekend.

"I'm super happy about the two victories last week, and am looking forward to trying to take my chance tomorrow [Saturday] and sprint for the yellow jersey," said Nizzolo, speaking at a video press conference in Nice on Friday. "I have a great team around me, everyone on the team is motivated, and we'll do our best to take our chances."

Asked which of the other seven riders on the WorldTour team's Tour squad he was looking for support from for the opening stage, Nizzolo said: "I think we have a strong lead-out, with Max Walscheid, Edvald Boasson Hagen and Ryan Gibbons, and then Michael Valgren and Michael Gogl as well. I think they're all ready to play a key role in the lead-out. We still have to decide how to play them, but everybody is ready to fight.

"There are no secrets," he added, when asked why he thought things had come together so well for him this year. "I finally had a winter without physical problems, and could train how I wanted over the winter, which made me ready for the start of the season. And then it was the same over this pandemic period, so it's nice to see that when I can train, I can be competitive for the victories."

He was also asked whether he was disappointed to not be able to wear the tricolore jersey of Italian champion over the next year, as his new European champion's jersey takes 'precedence' over it as a title.

"I'd like to have this problem more often, as it would mean I'd won something special," Nizzolo joked. "Of course, I love the Italian jersey, as it's one of the most beautiful jerseys in the world of cycling, but I'm really proud to wear the European champion's jersey around the world, so I think it will be a nice year."

Valgren is another of NTT's big hopes for a stage victory at this year's Tour, and after trying to help Nizzolo on the opening stage, the winner of the 2018 Amstel Gold Race is keen to be in the mix as soon as stage 2 on Sunday, which also starts and finishes in Nice but is longer – at 186km – much hillier than stage 1, and includes the first-category climbs of the Col de la Colmiane and the Col de Turini.

"It's pretty simple: my ambition, and our ambition, is to win, as much as possible," said Valgren at Friday's press conference. "I'm aiming to try to win a stage, and we have a fair chance of winning tomorrow with Giacomo."

Valgren – who lives in the south of France during the racing season – added that having the Tour's Grand Départ in Nice this weekend makes him feel like he's on home soil.

"I'll definitely go for breakaways and try to seek out any opportunities," the 28-year-old said. "I'm actually feeling quite calm. I got my arse kicked at the Critérium du Dauphiné [two weeks ago] but we had a good recovery plan, and I've worked hard, so now I've been feeling quite good these past few days. I'm feeling confident and am looking forward to getting started."