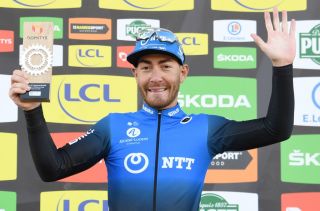 Giacomo Nizzolo (NTT) has carried his strong start to the season into Paris-Nice with a well-deserved win on stage 2. The Italian survived a day of echelons and crashes before coming around Pascal Ackermann in the final to take his second WorldTour win of the season. According his new boss Bjarne Riis, the win is down to confidence and clean bill of health.

"I think that he's had a great winter. There have been no issues like other years, when he's had injuries. This time he's had the right training and he's come into the season with good condition," Riis told Cyclingnews.

Nizzolo hit the ground running at the start of the year with a win at the Tour Down Under in January. He followed that up with second place finishes in Race Torquay and Kuurne-Brussel-Kuurne. However, his win in Paris-Nice marks a significant moment for the 31-year-old Italian. Until this win, he had never claimed two WorldTour wins in the same season, in fact his last win on the top stage came back in 2012 at the Eneco Tour. Nizzolo has always been consistent but according to Riis he hit a major peak in form.

"He went to Australia and already showed that he had form and now he's just progressed from there. I have to say that lately he's been flying."

"Today he didn't have a lead-out. He had a team that put him in the right position ahead of the final but in general he's just had super shape. He's a lot more confident and he's just beaten Ackermann in a sprint. He sat there in the lead group and then beat them all. You have to be strong to do that."

Nizzolo turned professional back in 2011 with Leopard-Trek and moved up the ranks as the team changed title sponsors. He won the points jersey at the Giro d'Italia on two occasions before signing with Dimension Data at the start of 2019 as the team fought for crucial WorldTour points.

In all of that time Nizzolo has often been considered somewhat of a nearly man in terms of sprinting but while his boss admits that there are other faster finishers in the peloton, few can match the Italian when he comes to a blend of durability and pace.

"I don't think he's fast like Ackermann, Caleb Ewan and Sam Bennett but he's fast and can be up there. Once in a while he can beat them but when you look at races like today and Kuurne where he was up there and sprinting for the win but when the racing is tough he can survive better than most sprinters. He has the power and that's his force. I just spoke to him after today's win and he's super happy but he's also gutted because he can't do Milan-San Remo. That would have suited him perfectly with the form that he has. He can do those small climbs, and survives them. You saw that Bennett and Ewan, they couldn't make it today because it was just too tough."

The win in Paris-Nice marks NTT Cycling's sixth – or seventh – win of the season, meaning that they are already close to or have even matched their entire tally for the entirety of last year.

"We also won a criterium in Malaysia but it doesn't matter. We’ve changed a few things in the team but we’ve just tried to build a good philosophy. The guys have been working hard and we've pushed them."

Either way the team have started the year with bang after making a raft of changes on the transfer front - twelve to be exact – and seeing Riis bring in a new line of management. When asked if the team had been pushed enough in the past, Riis provided a thoroughly diplomatic response and stressed the importance of the present rather than the past.

"I don't know. I don't think that's something I should comment on. What's important is that we work hard now. The work we're doing now reflects in our results. We just want to get the best out of the potential that we have. We've had a good start, and the spirit is good."

While the Paris-Nice continues so does the fallout around the coronavirus. Tuesday was meant to see the start of Tirreno-Adriatico but a raft of Italian races were cut from the calendar, with Paris-Nice spared. That situation might change to as the race moves south and more cases of the virus are diagnosed. Riis, however, paid tribute to the race organisers for their efforts.

"A lot of people have said we won't get to Nice but all I can say is that I hope that we get there. From what I've seen so far, and with the organization ASO have put together, it's been brilliant. I feel safe and our team feels safe. Racing under these circumstances isn't easy but they've made it a lot easier for us."