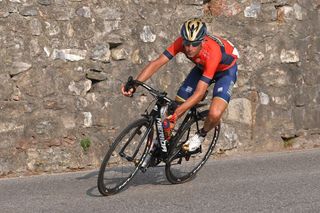 Vincenzo Nibali’s bid for a third victory at Il Lombardia ended when he was distanced on the lower slopes of the Civiglio, though at the end of a long season, the Italian had lined out in the Race of the Falling Leaves in hope rather than in expectation.

“The lights went out, like Van der Poel,” Nibali said, according to La Gazzetta dello Sport.

Nibali reached the finish in Como in 55th place, more than 6 minutes down on winner Bauke Mollema (Trek-Segafredo), finally bringing the curtain down on a season that saw him place second overall at the Giro d’Italia and win a stage of the Tour de France. “I wanted to finish the race because I know that the public, for better or for worse, always wait for me,” Nibali said.

Just before Nibali was dropped on the Civiglio, his wheel struck an errant bidon and he had to right himself against the footpath before re-starting. That effort hardly helped his cause, but the Sicilian refused to cite it as mitigation for his failure to follow, Mollema, Primoz Roglic et al on the penultimate climb.

“I bumped into a bidon that had slipped out of another rider’s hand. I accidentally hit against a rider from Lotto and I ended up near the footpath,” Nibali explained. “I had some cramps after that but there are no excuses. The truth is that my energy was gone.”

Il Lombardia was the final race of Nibali’s three-year tenure with Bahrain-Merida, a spell that yielded three podium finishes in Grand Tours and a solo victory at Milan-San Remo in 2018. The 34-year-old will switch to Trek-Segafreo in 2020, joining Mollema, Richie Porte and newly-crowned world champion Mads Pedersen.

The Tokyo 2020 Olympics and the World Championships in Switzerland are both stated goals for Nibali next season, but the remainder of his programme will only be sketched out this winter. His first rendezvous with Trek will be a team meeting in Wisconsin in late October before a December training camp in his native Sicily.

According to La Gazzetta, Nibali has already ruled out an early start to 2020 at the Tour Down Under or Vuelta a San Juan in January. Given Nibali’s desire to claim Olympic gold, it seems likely that his Grand Tour GC ambitions will centre on the Giro d’Italia rather than the Tour de France in 2020.

The route of the 2020 Tour will be unveiled in Paris on Tuesday, while the Giro d’Italia route will be presented in Milan on October 24.