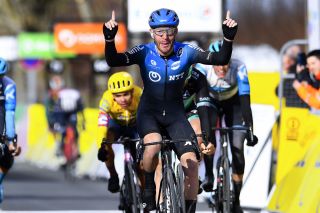 After a fast start to the 2020 season, with stage wins at the Tour Down Under and Paris-Nice, NTT Pro Cycling's Giacomo Nizzolo had to watch on as race after race was subsequently cancelled due to the coronavirus pandemic, but hopes now that he can once again target Milan-San Remo in early August, soon after the hoped-for resumption of racing.

While one of Nizzolo's former Dimension Data teammates, Mark Cavendish, had been all but out of action during the past couple of seasons while trying to recover from the Epstein-Barr virus, Nizzolo took on the heavy mantle as the team's main sprinter, and in 2019 managed to score stage victories at the Tour of Oman, the Tour of Slovenia and the Vuelta a Burgos.

Now, with the team having morphed into NTT Pro Cycling – and with Bjarne Riis having come in as the team's new manager, and Cavendish having moved on to pastures new at Bahrain McLaren – Nizzolo appears to have stepped up another level once more. Already in the curtailed 2020 season, he's taken those stage wins at the Tour Down Under and Paris-Nice, and the 31-year-old Italian from Milan now has his eye on the rescheduled Milan San-Remo, set for August 8 on the new 2020 UCI race calendar.

"I think it's the best race for a rider with my set of characteristics, and it's a race that starts in the city that I was born in, which already gives me a special feeling," Nizzolo said on his team's website on Monday.

"This year will probably be sunny," he said of the race's new summer slot, "but most of the time you start in a grey Milan, and then finish in the seaside sunshine of Liguria, which is San Remo. So, after 300km, it's unique. It's such an iconic race, so to win it would be super-special, especially for an Italian rider."

Nizzolo's best finish in San Remo is his 20th place last season, but, like all one-day races, he knows everything has to come together at the right time.

"I'm confident that I could play for victory," he said. "My relationship with the race itself is really bad, as I've never been at the start line in the condition that I wanted. Most of the time I was injured either a few days or weeks before, or I was sick or something.

"For example, in 2013 it was snowing. They started the race, then they stopped it, and then they restarted it again – and my current team won [Germany's Gerald Ciolek, for the team that was then called MTN-Qhubeka] – but by that time I was just freezing on the team bus.

"The year after that, I broke my collarbone a few weeks beforehand, and the year after I broke my foot," explained Nizzolo. "And then, in 2016, which was my best year prior to 2019, I was sick in Tirreno-Adriatico just beforehand."

When – and if – the season gets back under way with Strade Bianche on August 1, with Milan-San Remo set to take place just a week later, Nizzolo said that he, and his teammates and colleagues, will be raring to go.

"My approach will be to be super-focused, super-aggressive, and to try to take everything that is possible out on the road," he said. "I think it will be the mentality of many of us. Nobody has lived through this experience before, so it will be something new for everyone, and I think those that are mentally stronger will get a lot out of this situation."