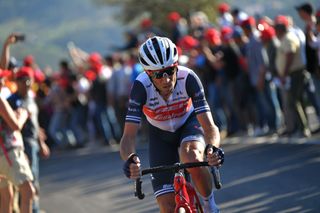 Vincenzo Nibali has hinted he may race on beyond 2021, with the COVID-19 coronavirus pandemic giving him a chance to recover from the efforts of his long career and the desire to make up for the lost racing of 2020.

He had always planned to retire after his second season with Trek-Segafredo but hinted in an interview with La Gazzetta dello Sport that the COVID-19 pandemic had led him to consider racing on into 2022.

"It's difficult to say now for sure, there are a lot of factors involved," Nibali admitted. "Perhaps it could happen if I think about some different objectives. This year is a kind of recovery year due to what has happened, everything has been turned upside down."

Nibali will return to racing at Strade Bianche on Saturday and will then ride an Italian race programme in August and September before targeting the hilly world Championships in Switzerland and then the Giro d'Italia in October. Richie Porte, Bauke Mollema and world champion Mads Pedersen will lead Trek-Segafredo at the Tour de France.

The Trek-Segafredo team have recently completed a training camp at altitude in the Italian Dolomites and return to racing at the Vuelta a Burgos in Spain on Tuesday, with another squad racing in Italy in August.

Despite the risks of racing while the COVID-19 pandemic is still seeing new cases emerge around the world, Nibali is convinced it is the right thing to do.

"I think it's right to start again, and start doing everything that we do in our lives, otherwise the consequences for our daily life, and especially our daily family life, will be very serious," he said.

Nibali is ready to accept a race without fans at the start and finishes if it can protect the riders' health and ensure that at least some racing goes on. "I think things will be different, like they were at Paris-Nice, with the start and finish 'behind closed doors'. We've got a strict protocol to follow. There are a lot of limitations, even our families can’t come to races."

Despite training hard at home in Lugano, Switzerland, during the European lockdown and more recently at the training camp, Nibali claimed he is unsure of his form as he prepares to head to Tuscany for Strade Bianche.

"To be honest, there's a huge question mark about my level. I feel good and think I've prepared well, but until you go up against everyone else in a race, you just ever know. Racing changes everything."

Nibali has ridden Strade Bianche eight times and his known for his bike handling skills but never secured a top-10 result due to the race's early March date. The rescheduled race calendar changes everything, with temperatures of 35°C and dusty dirt roads expected on Saturday.

"I really like Strade Bianche but I've never done well in it. The specialists have an advantage and now it’s one of the first races back… Mamma Mia, I don’t what to expect."

Nibali is the only active rider to win Milan-San Remo and Il Lombardia, and will target both Classics in August on August 8 and 15.

"Bang. Two Monuments back to back straight off…" Nibali said of his intense start to racing in the Italian summer.

"Everything has changed: the heat, the distances and the kilometres we've all ridden. We usually ride Paris-Nice or Tirreno-Adriatico and are in a racing routine. Not this time. Everything will be more complex and uncertain and can all make a difference. I'll find out how good I am in the races. But I suspect the Classics and the Grand Tours will produce totally different racing to what we're used to seeing."