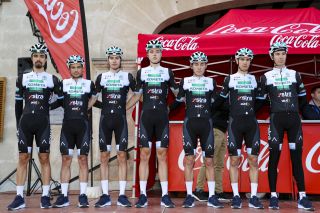 The Alberto Contador Foundation-backed Kometa development team has operated at UCI Continental level since 2018, but the arrival of Italian broadband-internet company EOLO sees the team step up to UCI ProTeam status from next season.

The three-year agreement with EOLO is also set to see the Spanish team become an Italian-registered squad from 2021, according to a press release, with the team to be headquartered at the EOLO campus in Busto Arsizio in Lombardy, in northern Italy.

Kometa-Xstra general manager Fran Contador – the elder brother of retired two-time Tour de France winner Alberto Contador – thanked the team sponsors for their support and added that he and the team were looking forward to the future at ProTeam level.

"A great opportunity has come out of the difficult moments," he said, referring to the coronavirus crisis. "We have always been very clear that the jump in category was a goal, but not at any price. Now we have a great challenge ahead of us with a great responsibility, but with the confidence in the fruits that our work is beginning to bear from the base."

Former pro and two-time Giro d'Italia winner Ivan Basso, who is the Kometa-Xstra sports manager, and hails from Lombardy, added: "We are very happy for the confidence that a company of the importance of EOLO has in this project. We share values such as humility, effort, sacrifice and self-sacrifice – values that its CEO, Luca Spada, knows perfectly – and are both united by our origin in the same region."

Spada said that EOLO was "delighted to support Ivan Basso and the Alberto Contador Foundation's project", adding: "At EOLO, we strongly believe in talent and achieving results through commitment, hard work, sacrifice and teamwork."

The new sponsor has already been involved in professional cycling this season as a partner on RCS Sport-run events in Italy, including Milan-San Remo, Tirreno-Adriatico and Strade Bianche.