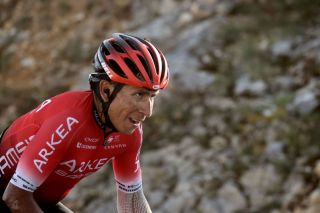 Nairo Quintana (Arkéa-Samsic) fell out of the running for the overall during stage 15 of the 2020 Tour de France (Image credit: Getty Images)

Injuries from a high-speed crash on Friday put paid to Nairo Quintana’s hope of a top GC result at the Tour de France this year, with the Colombian star suffering badly on the slopes of the Grand Colombier on stage 15 on Sunday.

The Arkéa-Samsic leader finally threw in the towel just as his compatriot Egan Bernal (Ineos Grenadiers) was also dropping behind, although Quintana was able to leave Bernal trailing and limit his losses to nearly four minutes, rather than Bernal’s much bigger gap of over seven.

Quintana duly paid tribute to teammate Warren Barguil, who buried himself ahead of his leader in order to ensure the damage to Quintana’s chances were, if still considerable, as low as possible in the circumstances.

But as Quintana rode up the Grand Colombier, he was a distant shadow of the rider who placed third overall in the Tour de l’Ain a few weeks earlier on the same climb, the bandages covering the injuries to his arms strikingly visible, and the consequences to his Tour hopes equally clear to all as well.

“I knew it would be hard to hold on on this stage with such a tough series of climbs, culminating in the Grand Colombier,” Quintana said afterwards. “I tried to do it, but my crash on the Puy Mary was the second I’d had in the Tour this year, and it was a big one, because we were going flat out at the time.

“I thought I could handle the pain, but a crash is a crash, however you look at it, and if I managed to get to the top of the Grand Colombier, it was thanks to my pride and my heart.”

Three times a podium finisher at the Tour, Quintana promised that he would try to finish the Tour on a high note, as well as thanking the team for their hard efforts during the stage.

But after such a promising start to the season, as well as a strong showing in the first stage of the Pyrenees, in particular, Quintana’s setback will be a hard blow for him and for the team to take.

“When it comes to the effects of a hard crash, the law of sport is merciless,” Arkéa-Samsic sports director Yvon Ledanois confirmed. “We’ve seen it with a high number of riders prior to Nairo, and this stage has been a truly harsh one, although our riders fought hard nonetheless.

“I’m going to have that image of Warren literally destroying himself on the last climb in favour of our leader in my head for a long time to come.”

Ledanois pointed out that the hardest stages of the race are yet to come in the third week, and he expressed high hopes that there could yet be some positive surprises for the team in the Tour’s final six days. But, as it stands, Quintana’s injuries have taken a fearsome toll on his GC chances.