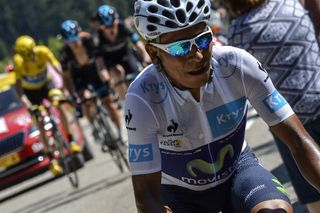 Nairo Quintana has revisited what he describes as a "sad" memory, claiming he could have won the 2015 Tour de France were it not for the actions of one of his own Movistar teammates on the penultimate day.

Speaking on the ESPN Bike show, Quintana did not name the rider in question, nor did he specify what went wrong, but he was firm in his belief it cost him he yellow jersey – still the missing link in his Grand Tour palmarès.

Quintana finished second to Chris Froome in the 2015 Tour, where the final mountain stage finished atop Alpe d’Huez. Despite attacking and gaining 1:20 on the Sky rider – who later revealed he was suffering with illness – he fell 1:12 short of the yellow jersey.

"On that Alpe d’Huez stage we had a strategy and there were teammates who worked very well and there were others who did not," Quintana told ESPN Bike.

"There was a moment that day – and he knows it – where, practically because of this rider, it was impossible to win the Tour de France."

Movistar had two riders on the podium at the 2015 Tour, with Alejandro Valverde placing third overall. On the penultimate stage, the Spaniard had attacked on the Col de la Croix de Fer earlier in the day, and Quintana had made a move of his own to join him. Quintana briefly dropped Valverde near the top before the pair were caught by Froome on the descent.

On the final climb up Alpe d’Huez, Quintana put in a brace of attacks before Valverde went clear himself. Quintana again responded by going over to join his teammate, and mostly rode in front of him before Valverde was dropped with around 8km to go. At that point, Quintana linked up with compatriot and teammate Winner Anacona, who paced him for three kilometres before he soloed to second place on the stage.

"I remember it as a sad day, because of the opportunity that passed me by," concluded Quintana.

At the time, however, Quintana struck a rather different note. Speaking to reporters after the stage, he insisted he’d lost the Tour in the first week, when he conceded 1:30 in the crosswinds on stage 2.

"I gave everything I had," he said on Alpe d'Huez. "The team did an exceptional job, with a great Winner Anacona helping me for part of the final climb."

Quintana would finish on the podium of the Tour behind Froome for a third time in 2016, but has not returned since. He left Movistar at the end of 2019, after a breakdown in the communication between himself, Mikel Landa and Alejandro Valverde at the Tour de France.

Quintana’s rivalry with Froome has also stirred debate in the past week, and it’s something Quintana addressed on ESPN Bike.

Movistar boss Eusebio Unzué recently claimed Froome was protected by a strong Sky/Ineos squad and never had to face Quintana mano a mano. Froome responded on social media with a series of sarcastic emojis before saying: "To be clear I have the utmost respect for Nairo Quintana and racing against him over the years has been an absolute pleasure. That headline did make me laugh a little though."

Asked about the matter, Quintana acknowledged Froome as "stronger", but claimed the team around him had played a big role in his success.

"Yes, I read about the Froome thing. We know he’s had a strong team and that they’ve saved him in many moments. But also it’s true that he was stronger than me.

"The good fortune he’s had in being on that team has taken him to where he is. As for myself, I fought as hard as I could and will keep fighting."

Quintana enjoyed a storming start to life with his new team, Arkéa-Samsic, winning the Tour du Var and Tour de la Provence before the coronavirus pandemic halted the season. He recently raised 87,600,000 Colombian Pesos - around £17,000 - by giving away his 2014 Giro d'Italia-winning pink jersey in a raffle.