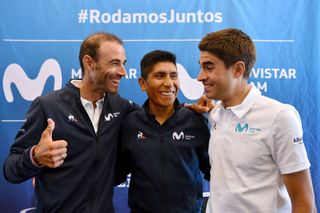 Alejandro Valverde, Nairo Quintana, and Mikel Landa all smiles at the start of the 2019 Tour (Image credit: Justin Setterfield/Getty Images)

The Movistar team have released a documentary series on Netflix, giving an insight into Richard Carapaz's Giro d'Italia victory and the tensions between Nairo Quintana and Mikel Landa at the Tour de France.

The six-part series, produced by the title sponsor's parent company, Telefónica, follows the Spanish squad through the 2019 season. Titled 'El Dia Menos Pensado' - 'The Least Expected Day', it offers, according to the team, "a thorough story, with unprecedented access".

"Filmed over eight months in locations across Europe and Latin America, from the team's headquarters in Pamplona (Spain) to the interior of Ecuador's northern Carchi province, ‘The Least Expected Day’ brings its cameras into the daily activities of the Movistar Team, looking to show the feelings and reactions of its main members," read a promo from the team.

Landa: My only option is patience

"The Blue outfit opened its doors to Telefónica at every pre-race meeting at the team bus, their hotel rooms during the massage, breakfast and dinner, and of course, the team cars where all the shots are called during the most important events of the cycling season."

The series focuses on the three Grand Tours, starting with Carapaz's victory at the Giro d'Italia in May. Things did not run so smoothly for the team at the Tour de France, where the presence of two leaders, Nairo Quintana and Mikel Landa, resulted in a confused and chaotic race strategy.

"If they don't resolve their differences, we have a problem," world champion Alejandro Valverde says at the start of episode 4, and the documentary doesn't shy away from the tensions and communication issues, notably on the infamous stage to the Col du Tourmalet, when Quintana was dropped but Movistar continued to ride hard on the front of the peloton.

The series then turns to the Vuelta a España, where Quintana this time shared leadership with Alejandro Valverde, who placed second overall.

"The team's home Grand Tour also marked the end of an era for the Movistar Team, with its fourth decade as a structure coming to a close, and a new beginning for the Blues, also covered in detail at the series," said the team.

"The collection of unique images is completed by interviews, unfiltered and full of sincerity, with the riders, sports directors and the staff supporting them over 15 countries every year, for a combined 26,723 kilometers during the three Grand Tours in 2019."