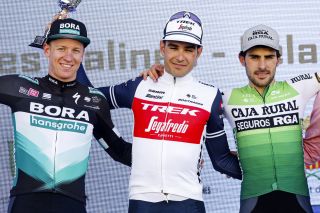 It seems like another lifetime since Matteo Moschetti had his impressive start to the 2020 season with two wins in the Trofeo Mallorca before he came crashing down in Etoile de Bessèges. But it has been less than eight weeks since the promising 23-year-old fractured his pelvis along with a scapula, ribs and vertebrae.

After surgery, the Italian completed intensive physical therapy in Forlì that has turned quite lonely amidst the coronavirus lockdown.

Moschetti crashed hard on February 7 on stage 3 of the race and underwent surgery on February 11 in Bergamo – just days before the first coronavirus case was diagnosed in the Lombardy region – now a hotspot for the COVID-19 coronavirus outbreak.

Following surgery he was moved to the Physiology Center of Forlì where, while he worked on rehabilitating his hip, the town soon went on lockdown, leaving Moschetti largely on his own.

"We decided together with his family, to entrust Matteo to the care of Fabrizio Borra and his team at the Fisiology Center of Forlì," explained Trek-Segafredo’s head physician Dr. Gaetano Daniele on the team's website.

"Matteo remained there alone, sweating and suffering for three weeks, that included six to seven hours of daily work personally and assiduously followed by Borra. This hard work allowed Matteo to obtain results that go well beyond the most optimistic prevision."

Moschetti exercised in the pool and in the gym to build his strength, recover his mobility and movement, and the work quickly paid off. He could walk unassisted after three or four days and saw continuous improvement.

"Yes, some days were hard. You wake up, you feel your body is a bit stiff, and some leg and hip movements are hard," Moschetti said. "But, despite losing a lot of strength in both legs, on my last day at the Center we did some tests, and they showed that both of my legs were on the same level, which is a really good sign and proof that all the hard work that was done paid off."

But Moschetti had gone to the rehab facility by himself, staying in a nearby hotel. As the coronavirus accelerated its spread across Italy, the town soon came under lockdown and his hotel closed.

"Luckily, the owner of the hotel had a small one-bedroom apartment not far from the Center, and I was able to stay there until the end of my treatment."

It was a lonely time, but with rehab from morning until evening and video conferencing to chat with his family, friends and partner, he kept busy.

"The situation was strange because the lockdown was initially in just two regions. At the time, I was already at the Center, so my biggest concern was whether I would be able to continue to do my treatments, and fortunately, I could. On the other hand, I knew that at home everybody was safe," Moschetti said.

"My parents continued to work because my mother works in a supermarket while my dad also had to work because he drives a distribution truck. My brother and sister were at home because the schools closed, but overall the situation was good, they were all safe, so I was quite calm.

"Then as the situation became more serious, they decided to extend the red zones to all the regions of Italy. That complicated matters because the hotel where I was staying closed, the restaurants in the regions as well, and most of the shops. I was lucky that the Physiotherapy Center stayed open, but in the last days, there were only four or five patients there, so it was a bizarre situation."

Now back at home, Moschetti can do short rides on the stationary trainer. Initially, doctors thought he would not be able to do so until May, so the cancellation of all of the races until June 1 hasn't had a big impact on his plans.

"Honestly, my first thought was not about the cancellation of races and suspension of the calendar. I was more concerned about the situation with the coronavirus and the progress of the infection and whether people would be safe or not. This is not an easy moment. It’s bigger than me, the riders, the team, and cycling.