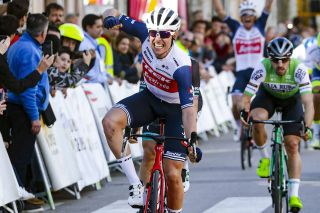 Matteo Moschetti was involved in a high-speed crash during stage 3 at the Etoile de Besseges Friday and sustained a fracture to the right acetabulum socket of his pelvis along with a dislocation of the right femur.

His team Trek-Segafredo confirmed the injuries in a press release and noted that he was transported directly to the Hospital Centre Alès-Cévenne in France for treatment following the accident.

"Matteo underwent a procedure under anesthesia to reduce the dislocation, put the limb in traction and free the joint," said team doctor Gaetano Daniele, who accompanied Moschetti to the hospital.

"Further medical check-ups ruled out further fractures or trauma to other parts of the body. This Saturday, he will undergo a new CT scan to determine whether surgery will be necessary."

Moschetti was involved in the crash during the third stage of Etoile de Bessèges. The crash happened around 15km from the finish. Trek-Segafredo said that the 23-year-old Italian never lost consciousness throughout the ordeal.

He started his 2020 season achieving  two wins in his first race of the year in Challenge Mallorca.

Unfortunate news.@moschettiteo was involved in a high-impact crash during Stage 3 of the @Etoile_Besseges earlier today and has fractured the acetabulum of his right femur. We will update on his status as we know more. Heal fast Matteo! pic.twitter.com/VJPEQIWlicFebruary 7, 2020