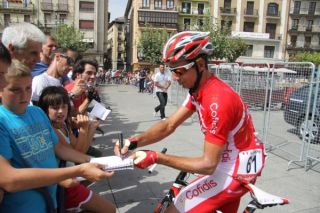 David Moncoutié insists he rode clean during an era in which doping was prevalent (Image credit: Susi Goetze)

In the aftermath of the first part of the ESPN documentary, LANCE, documenting the rise and fall of Lance Armstrong, the polemic over the levels of doping among his peers continues.

Who took what and when, during more than one generation of riders, most of whom never tested positive, remains largely a game of speculation. But while many depict the Armstrong era as almost wholly tainted by performance enhancement — "doping was inevitable," Armstrong’s manager Johan Bruyneel said earlier this spring — a few voices from the peloton of that time have been raised in protest.

"For the record — not everyone was doping," tweeted former rider Scott Mercier, who spent the 1997 season with the US Postal Service team, in response to the screening of the first episode of the two-part documentary.

Basso refuses to hit back at Armstrong after ESPN hypocrisy rant

The best-known point of reference on the subject is Christophe Bassons, the self-styled ‘Monsieur Propre’ - Mr Clean - who was bullied out of the 1999 Tour de France by Armstrong and others, after voicing his concerns over doping in the peloton.

"Bassons was genuinely robbed of a pretty successful career by doping," former Armstrong teammate Jonathan Vaughters has said of the French rider.

But there were others. Among those also frequently cited by peers as having turned their back on performance enhancement is French climber David Moncoutié, described by former Cofidis teammate David Millar as "one of the best climbers in the world" and an athlete who would baulk even at finishing a course of antibiotics.

Speaking on Thursday to French website Cyclismactu.net, Moncoutié, now a pundit for Eurosport, said: "Without doping, in that era, it was difficult.

"I turned pro in 1997, and between 1997 and 1998, to survive the big races without taking anything, was difficult. I felt more at ease after the Festina affair because people put the brakes on, especially in French teams."

The Frenchman said his progression continued until 2002, when he finished 13th overall in that year’s Tour de France, behind names such as Armstrong, Raimondas Rumsas, Levi Leipheimer, Ivan Basso and Michael Boogerd, all of whom were subsequently tainted by doping scandals.

"I still had the ability to be competitive, but from 2003, I felt that things had gone back to the way they were (before Festina). So, after that, I changed my objectives and decided to focus on stage wins."

He went on to win two stages in the Tour and four stages and the King of the Mountains prize in the Vuelta a España.

"For those who fought for the top spots at that time and above all the GC on the big races, it was difficult without doping," Moncoutié said. "Armstrong did as the others did. Fortunately, there were a few riders, like me, who rode without it, but we couldn’t compete in Grand Tours or the major Classics."

Asked if he felt he’d been robbed by doping of a better overall finish in the 2002 Tour, Moncoutié said: "It’s true that when you look at those GC results… it was the year when I really competed for the GC in the Tour, when I hung on every day.

"Nonetheless, I still finished a long way behind Armstrong, but it’s certain that without any doping it would have been a different race.

"But did I really have the mindset to compete for the podium? It’s hard to say," Moncoutié added. "I don’t really have any regrets. I managed my career in the circumstances of the time."

How to watch the Armstrong documentary

Both parts of ESPN's 30 for 30: LANCE can be viewed on the ESPN Player, which is available in Europe, Asia and Africa with a monthly pass. The price comes to £9.99 ($12.16), giving you access to ESPN films, coverage of college sports around the USA, the X Games, and much more besides. An annual pass will set you back £69.99 ($85.21). A week-long free trial on offer with both packages, and you can opt-out of both at any time.