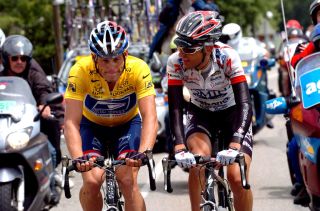 LANCEE will only be aired in the USA on sports network ESPN, but for Americans abroad it will be possible to view if you have a subscription to the network. It's quick and easy to sign up to ExpressVPN to simulate being back in your home country, giving you access to ESPN as well as other US television and streaming services while out of the country.

In the new ESPN Lance Armstrong documentary, LANCE, by filmmaker Marina Zenovich, the American explains how in 2013 he went to Italy to apologise to Italian rider Filippo Simeoni for having belittled him during the 2004 Tour de France. In response, Simeoni told Italian newspaper Il Giornale on Monday that he believes Armstrong deserves a second chance.

Simeoni: "Armstrong and past still haunt me"

On stage 18 of the 2004 Tour, Domina Vacanze's Filippo Simeoni attempted to bridge across to a six-man breakaway only for the race leader – US Postal's Lance Armstrong – to go with him, eventually forcing Simeoni to give up and return to the peloton as Armstrong's presence would have forced other teams to chase the breakaway down.

The reason for the very public show by Armstrong was that in 2002 Simeoni had testified against Dr Michele Ferrari – Armstrong's coach for all seven of his seven Tour de France victories, between 1999 and 2005. Armstrong was later stripped of all of his Tour titles after having admitted to doping.

Simeoni, too, had doped while working with Ferrari throughout the 1990s, but started a defamation case against Armstrong after he'd called Simeoni a liar for speaking out against Ferrari.

"You made a big mistake. You shouldn't have testified against Dr Ferrari and especially not sued me for defamation. I have no problems. I have time, I have money, and I can destroy you whenever I want," Simeoni later revealed that Armstrong had said to him, leaving him in no uncertainty as to the American's feelings towards the Italian.

In the new documentary, Armstrong recalls how, in 2013, he went to Italy to see Simeoni to apologise. On Monday, Simeoni told ilgiornale.it the rest of the story.

"True, Lance Armstrong came specifically from Texas to Italy to meet me and talk to me face to face. He called me by phone and we made an appointment to meet in Rome. Pier Bergonzi – a journalist from Gazzetta dello Sport – and a friend of the Texan, as well as my interpreter, were also with us.

"We talked to each other for more than an hour; above all I listened to his apologies, sincere and heartfelt, and for my part I explained to him my torment, my anger and my pain for what he had let happen to me," said Simeoni.

"I freed myself from the many ghosts that had accompanied me for years, even though it still took some time before I had the strength to talk about it serenely, with the right detachment that was necessary."

Describing Armstrong, Simeoni added: "He was so strong and powerful that a person who was not from the same [cycling] environment couldn't even imagine what he was like. He had a crazy physique, but it was his head that made the difference.

"To get what he had, however, he made some serious mistakes. He lost his reputation, which was the most beautiful and precious thing he had. It ruined the dream of many cancer patients, who had elevated him to [the status of] legend," Simeoni said of Armstrong's work with cancer patients at the height of his career, ahead of his admission to doping.

Describing the aftermath of what unfolded on stage 18 of the 2004 Tour de France between Annemasse and Lons-le-Saunier, Simeoni continued: "He wanted to teach me a lesson, he wanted me to experience a public humiliation. He did it."

Once the pair were back in the peloton, Armstrong made a 'zip the lips' gesture to the television cameras, and Simeoni said that he was surprised by the immediate reaction of some of the other riders, and some Italians, in particular.

"They insulted me, as if I were a real traitor – a reprobate to be driven into the sewers," said Simeoni, adding that he later received apologies from some, but not others.

"He is a man who made a mistake, admitted his faults and paid, but it is right that he now turns the page," Simeoni said of Armstrong. "He paid, and everyone deserves a second chance. They took away his seven Tours, but anyone who's raced a bike knows that he still won those Tours. He would probably have won even without doping, even though it would have been harder for him."

Asked by Il Giornale whether other dopers – who, like Armstrong, have been given long or life bans from the sport, with the Italians Danilo Di Luca and Riccardo Riccò given as examples – should be given another chance, Simeoni replied: "Why not? They are all part of the same cycling. It was a terrible time – very difficult and complicated. They have been misled, sanctioned and now maybe the time has come to jump forward and turn the page. Everyone deserves a second chance – even people like Armstrong."