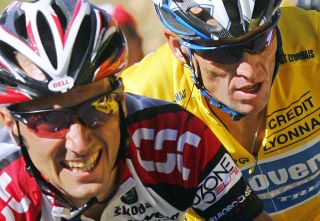 Ivan Basso has refused to hit back at Lance Armstrong despite the Texan's claims in the ESPN 30 for 30 documentary that Basso, along with several other ex-dopers, was "glorified" and had an easy path back to the sport after his doping suspension, still playing an active role and earn a living today.

In the second and final part of the 'LANCE' documentary that will be aired on the ESPN Player on June 1, Armstrong spoke about Basso and other former dopers who have managed to return to the sport to explain his decision to visit Jan Ullrich in Germany in 2018 when he was suffering with substance abuse problems in 2018.

In the final moments of the documentary, Armstrong becomes emotional when asked about Ullrich and how he was also ostracized after his doping problems. Armstrong blames the sport of cycling for what happened, comparing his own plight with that of Ullrich and Marco Pantani, and constrasting the way they have been treated with Basso, Erik Zabel and George Hincapie.

"The country of Italy glorifies Ivan Basso, idolises him, puts him up there, gives him jobs, invites him to races, puts him on TV. He's no different to any of us...  Yet, they disgraced Marco Pantani, they destroyed him in the press, they kick him out of the sport and he's dead, he's fucking dead," the Texan argues.

"The country of Germany idolises Erik Zabel, Rolf Aldag, gives them jobs, puts them on TV, invites them to races, puts them on the podium. But they disgrace, they destroy and they fucking ruin Jan Ullrich's life. Why?

"The country of America idolises, glorifies, worships George Hincapie, invites him to races, gives him job, buys his shit. And they disgrace and destroy me. That's why I went [to see Ullrich in Germany – Ed.]. Because that's fucking bullshit."

Basso was, along with Ullrich and Pantani, one of Armstrong' biggest Tour de France rivals but played a far more diplomatic game when his doping was exposed in the months after his dominant 2006 Giro d'Italia victory. He eventually confessed but was helped back into the sport by parts of the Italian media and the Italian Cycling Federation after years of other doping scandals. He was signed by Liquigas as their Grand Tour leader and went on to win the 2010 Giro d'Italia, later retiring in 2015 after being diagnosed with testicular cancer.

"I've done good and some not so good things in cycling," Basso told the Italian newspaper Il Giornale, when asked about Armstrong's comments.

"In 2006 I was caught up in Operacion Puerto and for that my back was put up against the wall: I confessed and I paid for it with a two-year ban. I went from heaven to hell. For the last 15 years I've been working hard in the world of cycling. With Alberto Contador we run a development team [Kometa-Xstra] and we've got other interests. We try to make the sport better."

Basso also refused to criticise Armstrong for the support the Texan showed him and his family.

"To be frank, I haven’t seen the documentary and so I don’t know if he expressed himself that way. I can only say that I'll always be grateful to Lance, because he was always helpful, very helpful. When my mother Nives became ill with cancer, he did everything he could to help us. The same when I was ill in 2015. What can I say? He was always generous and there to help."

Basso never managed to defeat Armstrong at the Tour de France, despite working closely with Bjarne Riis at the CSC team between 2004 and 2006. He still believes that Armstrong was simply a better rider.

"Back then cycling was strange but Lance was a force of nature – he would have won anywhere and everywhere," Basso said.

Both parts of ESPN's 30 for 30: LANCE can be viewed on the ESPN Player, which is available in Europe, Asia and Africa with a monthly pass. The price comes to £9.99 ($12.16), giving you access to ESPN films, coverage of college sports around the USA, the X Games, and much more besides. An annual pass will set you back £69.99 ($85.21). A week-long free trial on offer with both packages, and you can opt-out of both at any time.