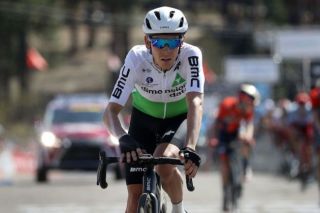 Louis Meintjes (Dimension Data) is bringing the curtain down on something of a season to forget at the Tour of Guangxi. At the start of stage 5 in Liuzhou, the South African lamented the loss of two months of his season due to two separate crashes and admitted that he's looking forward to putting 2019 behind him.

The climber was one of multiple riders to crash out of Paris-Nice on a crosswind-hit stage 2, sustaining a groin injury that kept him out of action until the Tour de Romandie. Then, just ten race days after returning, he was caught up in a late crash on stage 4 of the Tour of California.

Having sustained a fractured wrist in that crash, Meintjes wouldn't return until the Adriatica Ionica Race in late July. The stop-start nature of the 27-year-old's season meant he was never able to get into the racing rhythm, leaving much of the year a write-off.

Meintjes out of Tour of California with fractured wrist

"It's not been great," Meintjes told Cyclingnews. "I had a pretty serious crash at Paris-Nice and then again in California. So, it was a case of just getting into shape and then you pretty much start all over again. Both times it was at least three weeks off the bike.

"There have been positive signs this year, at least. So, that's good."

Meintjes managed to make it to a Grand Tour in 2019, completing the Vuelta a España and taking a seventh place on the mountainous stage 18 to Becerril de la Sierra.

He made the break of the day, later going on the attack on the Puerto de la Morcuera and finishing alongside Nairo Quintana and Tadej Pogačar as the second-best finisher from the break, behind stage winner Sergio Higuita (EF Education First).

Another positive late season result for Meintjes was his 11th place at Gran Piemonte, which finished with a summit finish on Oropa. But despite these September sparks of hope, he's just glad to get the year over with and refocus on the future.

"I'm looking forward to the offseason, yeah," he said. "It's not been that I've had that many race days this year, but mentally it's been taxing.

What the South African climber will be planning for is not yet certain, though the recent unveiling of the Tour de France route has Meintjes interested in a return to a race in which he finished eighth overall in 2016 and 2017.

The 2020 Tour route is laden with climbs and has just one time trial, seemingly perfect for a pure climber like Meintjes.

"I don't know," he said when asked about his 2020 plans. "I think the Tour again. It sounds like a pretty good course. I'll probably try to build around that. I'd start my season a bit later as well, what with being in China at the moment."

The Tour of Guangxi is the last WorldTour race for Team Dimension Data, who will rebrand to Team NTT next season. With that come changes to the roster, with nine new signings already announced – including World Hour Record holder Victor Campenaerts ­– and five on the way out, with Mark Cavendish certain to leave too.

But despite the upheaval around him, 2020 will be business as usual, with Meintjes saying that "it'll just be like normal” – and hoping, no doubt, that his unlucky 2019 is not the new normal.