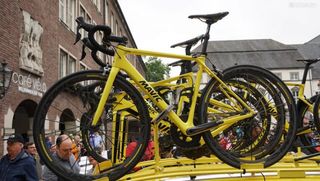 Mavic employees have appealed to the brand’s parent companies demanding answers after the wheel and equipment manufacturer was placed into receivership in a cloud of confusion this week.

Mavic, which supplies neutral service support at the Tour de France, had to resort to the financial measures on May 2, leaving the jobs of 250 employees in France at risk.

It is now uncertain who actually owns Mavic and who is responsible for its future, with its 2019 sale to private equity firm Regent LP apparently turning out to be bogus.

Mavic’s Comité Social et Economique (CSE), the body representing its employees, together with the CFDT and CFE-CGC trade unions, have issued a statement calling for clarity.

It explains that last July, Mavic was apparently sold by its parent company, Salomon, to Regent LP, shortly after Salomon shareholder Amer Sports – the Finnish company that also owns tennis brand Wilson – was itself sold to a Chinese consortium.

Despite Mavic appearing on Regent LP’s portfolio, the CSE claimed the acquisition never took place and Mavic instead went to the hands of a mystery company in the USA.

"A few days ago, Mavic staff representatives learned that, contrary to what had been publicly announced, Salomon had not sold their company to Regent LP but to a Delaware-based company M Sports, without any capital link with Regent LP," read the statement.

"Even worse, since its sale by Salomon, Mavic has been incomprehensibly abandoned and has never really been taken over, neither by Regent LP, nor by M Sports.

"Many questions arise, to which the CSE and the Mavic inter-union intend to obtain answers: Under what conditions did Salomon and the Amer Sports group sell Mavic, who is behind this company M Sports, and why did it acquire Mavic?"

In the face of a lack of communication from Regent LP, Mavic’s CSE triggered an economic alert in September and then in December requested Mavic be placed under the protection of the local Commercial Court.

"Why did we have to wait several months before the receivership was finally opened? Isn’t it too late to find a serious buyer?," read the statement.

"What has happened in the meantime? Absolutely nothing!"

According to the CSE, Mavic is still "completely dependent" on Salomon, which it says "must still be considered as the real owner of Mavic".

As such, it called on the mountaineering brand to step in and take responsibility.

"In any case, in view of Mavic’s lack of autonomy, no takeover will be possible without the participation of Salomon and the Amer Sports group.

"Salomon must therefore fully assume its responsibilities, all the more so as Mavic has contributed significantly to the group’s results for many years."