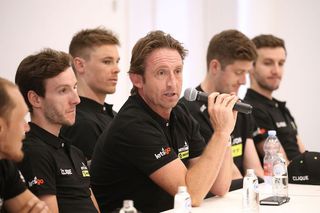 Reacting to the route of the 2020 Tour de France, which was unveiled in Paris on Tuesday, Mitchelton-Scott's head sports director, Matt White, said that he liked the course, and thought that it looked suited to teams that are "versatile and aggressive".

Mitchelton-Scott: Our most successful Tour de France ever

That lack of time trialling could in fact suit a team like Mitchelton-Scott, who will have the choice of fielding such riders as Simon Yates, Adam Yates and Esteban Chaves – and perhaps all three. None are particularly strong against the clock, but all are first-rate climbers, and so the final, uphill six kilometres of the race's one 36km individual time trial will at least suit them.

"It’s 30 kilometres of flat, then six kilometres of climbing," White said of stage 20 from Lure to La Planche des Belles Filles – the penultimate stage of the 2020 Tour. "The race wants the battle to come down to the wire and I think that with the course they’ve designed, it could potentially have that effect."

The 2020 Tour route appears to have something for everyone throughout the three weeks, rather than a defined flatter opening week and somewhat of a gradual build-up to the big climbs in the second and third weeks, which, says White, should see a big change in the style of racing we can expect to see.

"Normally in the first week, when it starts in northern France, you have five or six sprint stages and it's controlled by the sprinters' teams, but next year those teams will have to take a bit of a backseat," he explained.

"I think for the key guys and the guys going for the GC, it won't really affect them too much, as gone are the days that you're building through the Tour de France," said White. "You're arriving at the Tour at 95 per cent, and ready to go by the time we get to the first real selective day.

"What it does change is that the majority of the peloton will be out of the running for the GC very early, which means you'll see an aggressive style of racing because it's going to be a little bit easier for teams to control," he said.

At last year's Tour, Adam Yates was unable to challenge for the GC in the way that he'd hoped and expected to, but twin brother and 2018 Vuelta a España champion Simon Yates took two stage wins along the way, while Daryl Impey and Matteo Trentin also took stage victories, making it what the team called its most successful Tour ever.

Whether the team puts everything behind Simon or Adam in 2020, or both of them, remains to be seen, while in Chaves the team has a rider who finished on the podium at both the Giro d'Italia and the Vuelta a España in 2016. The team also has Mikel Nieve – a veteran of 18 Grand Tours who has finished six of those in the top 10 overall, with stage wins at both the Giro and Vuelta. The 35-year-old Spaniard tends to be employed as a domestique de luxe at Grand Tours, but is also very capable of scoring a top result.

"I think it's a good-looking route for teams that are versatile and can race aggressively, so there are certainly no complaints about the course from our behalf as a team," White added.

"The difficulties in the race are very sporadic, and are scattered right throughout the route. When you look at stage 2, with 4,000 metres of climbing, and then on stage 4 there's the first hilltop finish... The back end of the Tour is very hard, but the difficulties start straight away. So it's a tough one."