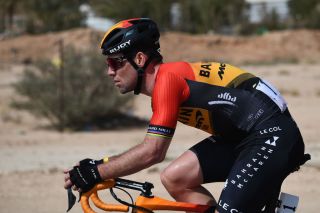 Mark Cavendish and his Bahrain McLaren teammates return to racing at the Vuelta a Burgos next week with the team fully backing their Tour de France leader Mikel Landa over the six-day race.

The race (July 28 to August 1) marks the team’s first major competitive outing since they left Paris-Nice mid-race in March as Europe began to phase in COVID-19 lockdowns across nearly every major country. In the months since Bahrain McLaren riders and staff have been hit with major pay deferrals, while Brent Copeland has departed for the general manager role at Mitchelton Scott. Meanwhile, McLaren has been forced to let go of around 1,200 workers at the UK base, and there are growing concerns that the car manufacturer will step down as the team’s secondary title sponsor at the end of the season due to financial problems.

Despite the somber backdrop, the team enjoyed a strong start to the 2020 season before lockdowns were imposed with five wins, including a stage in Paris-Nice. Tour de France leader, Mikel Landa, will spearhead the team’s GC challenge in Burgos, while Cavendish will, according to the team ‘will try his chances’ on stages 2 and 4, which are likely to end in bunch sprints.

“We had our final training camp in Germany with my sprinter team-mates, and then a few of us head to Burgos; a race which will get us back into the swing of things,” Cavendish said in a press release issued by his team.

“We are going there to support Mikel Landa who has been training full-gas with the guys for Tour de France, so he is in incredible form”.

Landa will be supported by Pello Bilbao, Damiano Caruso, and Eros Capecchi in the mountains, while Marco Haller, Heinrich Haussler, and Cavendish will target the sprints. All seven riders are on the team’s long-list for the Tour de France.

“This is it! We have a final few days of training before we go off racing,” said Rod Ellingworth.

“We’ve had three locations for training over the last few weeks. One in Andorra, one in Italy and one in Germany. The camps all finish this Saturday, and then there are a couple of days to go before we start racing next week in Burgos. Everyone is in good condition and most importantly of all in good health.”

Director sportif, Gorazd Štangelj, is expecting Landa to hit the ground running, even with a highly competitive field in place. Landa won the race back in 2017 when riding in Team Sky colours but moved to Bahrain-McLaren at the start of the year via Movistar. His 2020 spring was overshadowed when he was hit by a car during training but he finished third overall at the Ruta del Sol in February. Cavendish raced in both the Saudi Tour and the UAE Tour but is still looking for his first competitive road win since the start of 2018.