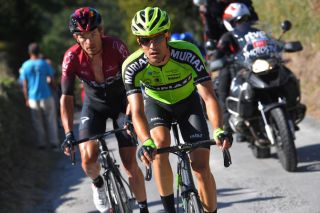 Sergio Samitier (Euskadi-Murias) was able to drop Vasil Kiryienka (Team Ineos) on the final climb of stage 15 of the 2019 Vuelta a España (Image credit: Getty Images)

Kamil Malecki will move up to the WorldTour with Polish squad CCC Team in 2020, having spent the past five seasons with the CCC Development Team, and in doing so becomes the fifth Polish rider on the senior team's roster for 2020.

Euskadi-Murias to disband at the end of this season

"It's a dream come true for me," said the 23-year-old on the team's website. "I feel really proud that I'll represent the first Polish WorldTour team in cycling. It’s hard for me to describe in words, but it's an amazing feeling to know that I've reached this phase in my career.

"Over the next year, I'd like to continue to develop and progress as a rider, and do my best to be a strong rider for the team, and play my part in helping the team at all of my races. I will make the most of this opportunity," Malecki said.

"As well as winning stages and the general classification at some of the Polish 2.2 races, including the CCC-sponsored CCC Tour-Grody Piastowskie, Kamil also showed his potential in the Classics, just missing the top 10 at the Volta Limburg," added CCC Team general manager Jim Ochowicz. "We're looking forward to seeing what he can do with us next year.

"Kamil will have the chance to learn the ropes from some of our more experienced riders, which will help him to continue to develop as a rider," he said.

The 24-year-old rode aggressively in the mountains at this year's Vuelta a España, and makes the step up to the sport's top ranks ahead of his current team, the Pro Continental-level Euskadi-Murias, which will disband at the end of this year.

Samitier won the mountains classification at this year's Tour of the Alps, and was part of the day's main breakaway on stage 15 of the Vuelta, attacking on the final climb of the Alto del Acebo, but eventually fading as Jumbo-Visma's Sepp Kuss caught and passed him to take the stage win.

However, Samitier was handed the 'combativity prize' at the end of the stage for his efforts, and managed to finish third overall in the Vuelta's mountains competition.

Italian Pro Continental team Bardiani-CSF-Faizanè has extended the contracts of Vincenzo Albanese, Mirco Maestri and Alessandro Tonelli for 2020, the team has announced.

"Albanese has the potential to be a winning rider, and together we'll work to make 2020 an opportunity for a relaunch. Maestri embodies the forward spirit of our team and we expect confirmation. Tonelli will be our team man – a fundamental element to amalgamate a new group," he said, with the three riders part of 10 who will remain with the team in 2020.

Ten new riders have also signed for next season, making it somewhat of a new era for the Italian outfit.

"We wanted to carry out a deep renewal, and we are convinced that we have built a competitive and well-equipped team," Reverberi said, having now completed the team's roster for 2020 with 20 riders.