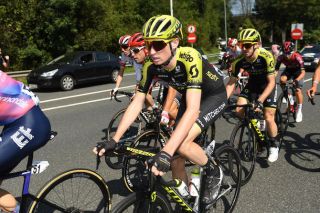 Twenty-three-year-old Australian Lucas Hamilton has signed a contract extension that will keep him with Mitchelton-Scott until at least the end of 2021, the team has announced.

Hamilton has spent the last two seasons at the Australian WorldTour team, and this year took the overall title at the Coppi e Bartali stage race ahead of teammates Damien Howson and Nick Schultz in March, and a stage victory and second overall – behind teammate Daryl Impey – at the Czech Tour in August.

This year also saw Hamilton ride his first Grand Tour – the Giro d'Italia in May, where he finished a very credible 25th overall, with fourth place on stage 7.

"I love it here," he said in a press release. "I appreciate the team taking me on for the extra year; it shows that they have confidence in me, and I get a kick out of that.

"This year was probably the biggest leap I have made, in terms of racing, in my career," continued Hamilton. "I did all ranges of racing: I did lower [categorised] ones, which I was able to target myself, and was able to pull off a couple of wins, and then the Giro, obviously, getting my first Grand Tour under the belt, trying to get that consistency for three weeks, and it was a good experience."

Head sports director Matt White added: "It's definitely been a breakout year for Lucas, and we can certainly see a big future for him, and hence the reason we would like to lock him in long-term with the team.

"Lucas has played an important role in a lot of races during the season, both in a support role at his first Grand Tour and in winning some smaller races. We can see he has big potential and we believe his home is here," he said.