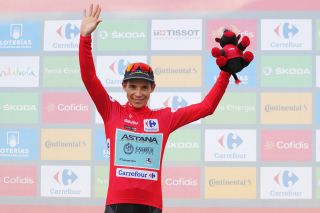 For the third time in a week, stage 7 of the Vuelta a España has seen Miguel Ángel López (Astana Pro Team) move into the overall lead, but his advantage, time-wise, continues to remain painfully narrow.

But Superman, third on the ultra-tough summit finish of Mas de la Costa, said he was not worried by Movistar's numerical superiority in the higher realms of the GC or that Roglic could well have the upper hand on stage 10's time trial at Pau.

"I'm not concerned at all, I've got a great team and I'm in great shape," Lopez insisted to reporters.

"There are a lot of mountain climbing to go, stages in which there will be some big gaps, but we know there will be gaps in the time trial as well. There's a long way to go."

Superman recognised that the "strongest riders of the Vuelta were the ones who were up there today".

"But there's a long way to go, so let's stay calm and I'm going to enjoy being in the lead whilst I can."

Lopez was coy about naming one rival of the three closest on GC as the most dangerous, but he did recognise that stage 5's summit finish at Javalambre, where he had previously taken the lead and dropped his rivals, albeit by just 12 seconds, "was different to today's and we were all pretty much equally strong on that climb."

"But today's [stage 7's] climb was more one for Valverde, it was much more explosive. We can't draw too many conclusions, my three rivals were up there too."

Lopez was more optimistic about his chances on the Andorra stage on Sunday, with 'real' high mountain terrain that has suited him well.

"It's the kind of stage I like, for riders that have a lot of endurance, with long, hard climbs and no time for recovery in between."

"Andorra's been good to me in races in the past, and I hope it's equally good to me this time around, too."