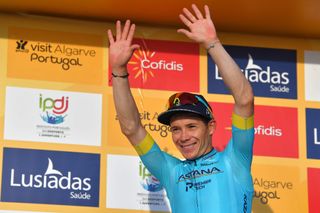 Miguel Ángel López will race only in France in the build-up to his Tour de France debut in August, while his Astana teammate Jakob Fuglsang is set to compete at the Tour de Pologne and Tirreno-Adriatico before leading the team at the Giro d’Italia.

On Friday, Astana confirmed their leaders' racing programmes for the remainder of the season, which is set to resume in August after being interrupted by the COVID-19 coronavirus pandemic.

López, who is currently training at home in Colombia, is expected to return to Europe in mid-July and he is due to attend a team training camp in Sierra Nevada, Spain.

Alexey Lutsenko: We can expect a lot of spectacular racing

Fuglsang: It's a pity the Olympics have been postponed

Upon his return to competition, the 26-year-old will follow a similar program to compatriot and Tour champion Egan Bernal, taking in La Route d’Occitanie (August 1-4) and then riding the Mont Ventoux Dénivelé Challenge on August 6. He will also ride the Critérium du Dauphiné (August 12-16) ahead of the Tour de France Grand Départ on August 29.

López has raced just once so far in 2020, winning a stage and placing third overall at the Volta ao Algarve in February. In 2018, he finished on the podium of both the Giro and Vuelta a España, and he will lead Astana’s GC challenge at the Tour this year.

Astana have also confirmed that Fuglsang will skip the Tour in order to focus on leading Astana at the rescheduled Giro, which is due to take place from October 3-25.

Fuglsang, who won the Vuelta a Andalucía in February, will resume competition at Strade Bianche on August 1, followed by the Tour de Pologne (August 5-9). The Dane will return to Italy to ride Gran Piemonte (August 12) and Il Lombardia (August 15). His final preparation for the Giro will come at Tirreno-Adriatico, which is scheduled for September 8-14.

Alexey Lutsenko, meanwhile, is set to target a number Italian one-day races in early August, when he rides Strade Bianche, Regiona Lombardia, Milano-Torino and Milan-San Remo. He will then line up alongside López at the Critérium du Dauphiné before riding the Giro dell’Emilia (August 18), which will be his final outing before the Tour de France.