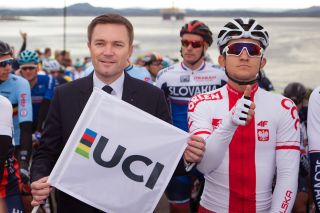 UCI President David Lappartient will be in Tuscany on Saturday for the return of WorldTour racing at Strade Bianche but he has warned that the ongoing COVID-19 coronavirus pandemic means that every race risks being cancelled due to possible spikes in COVID-19 cases and changes in national regulations of countries that host races.

The number of COVID-19 cases has grown in Spain, Belgium and France in recent days, leading to new local restrictions and even quarantine orders in some countries. However, racing is continuing at the Vuelta a Burgos in Spain, while Egan Bernal and Chris Froome will start the four-day La Route d'Occitanie stage race in southwest France on Saturday and Strade Bianche marks the return of the men's and women's WorldTour.

The French Grand Tour is considered vital for the survival of many teams. It is due to start in Nice on August 29 but on Thursday French sports minister Roxana Maracineanu warned that crowd sizes will be controlled, with even road-side spectators obliged to wear face masks.

"Our sport is still alive: others sports cancelled everything but we have a race calendar," Lappartient told La Gazzetta dello Sport.

"Italy deserved to have Strade Bianche as the first race of the WorldTour because it was the first country hit by the virus and has suffered greatly. Now Italy is in better health than other countries and can send out a positive message. The race in Siena can send out a message of hope for cycling and for all of sport. We're back and want to give people something to smile about. Things are difficult but cycling is strong.

The UCI has confirmed the Road World Championships will be held near its Swiss headquarters in Aigle in late September, after the Tour de France. Lappartient admitted that, like every race, even the UCI's own event is at risk of cancellation, with no backup plan for the championships in Oman or a new date in the spring of 2021.

"They're confirmed but here's no Plan B if things get worse in Switzerland. We know that risk exists. Every race is at risk, even the Tour," Lappartient said.

Lappartient will have to follow the UCI's strict medical protocol when he attends Strade Bianche. He will not be allowed to have close contact with riders and teams in the protective bubble and will have to wear a mask in race areas. Professional cycling has so far avoided a COVID-19 positive case in the team and peloton bubbles, and Lappartient praised UAE Team Emirates and Israel Start-Up Nation, who pulled riders and staff from races due to suspected contact with COVIUD-19 cases.

On Wednesday, the UCI announced fines and other punishments for riders and race organiser who do not respect the COVID-19 protocols.

"They're rules, not recommendations. Cycling is not like Formula 1 that has just 20 drivers, we've got 2000 men and women all over the world and so we needed to take some strong decisions. There's no choice, they have to be respected," Lappartient said.

Strade Bianche and Giro d'Italia organiser RCS Sport feels penalised by the rescheduled race calendar, with the Tour de France given September dates, while the Giro d'Italia clashes with all the Classics.

On Tuesday, RCS Sport had to redesign the Milan-San Remo route after the mayors of Liguria refused to let the race pass along the packed coast in the height of summer. Lappartient, however, justified the new race dates.

"If anyone can a better solution, I'd like to see it. I take responsibility for the decisions and it was impossible to do things differently," Lappartient argued.

"The broadcasters where clear: they didn’t want the Classics during the Tour because of its global coverage. That's the key to everything.

The new calendar has created a Super Sunday on October 25, with a mountain stage of the Vuelta a Espana, the men's and new women's Paris-Roubaix and the final stage of the Giro d'Italia all held on the same day. Lappartient has described it a historic day for the sport but La Gazzetta dello Sport suggested it was actually a sad day for the sport due to the massive overlap of racing.

"Do you think it's a sad day? I can understand that but there was nothing we could do," Lappartient argued.

"We asked the Giro to start on the Friday and so finish on the Saturday but it wasn't possible. Fortunately there will be different times for the three races so they don't overlap on television."

Lappartient was also quizzed about the UCI's decision to recently award a 'UCI Order' to Gurbanguly Berdimuhamedov, the President of Turkmenistan – a country with a human rights record described as 'dire' thanks to links with highly influential Turkmen-born UCI board member Igor Makarov.

Makarov has taken the past three UCI presidents on state visits to the country, where his oil and gas company holds lucrative contracts.

In 2018, the Turkmen capital of Ashgabat was announced as the host of the 2021 UCI Track World Championships, and recent reports in Turkmen state media suggest the 2026 Road Worlds will also take place there.

"It's all a lot simpler than people have read. It's a civil prize, not a sporting one," Lappartient said in defence of the decision.

"The president of Turkmenistan proposed the creation of a World Bicycle Day to the UN. The medal is for a public figure that has helped develop cycling in the world."